Tampa defeated the Flames in seven games to win their first Stanley Cup in their first appearance in a Final series. This was the last Stanley Cup Finals to air on the ABC/ESPN family of networks, as the 2004-05 NHL Lockout suspensed play for the next season. NBC and Versus (formerly OLN) would pick up the NHL for the 2005-06 season

Tampa Bay defeated the New York Islanders and Montreal Canadiens in the first two rounds and defeated Philadelphia Flyers in the Conference final to advance to the final. Calgary had beaten the Western Conference's top three seeded teams, the Vancouver Canucks, Detroit Red Wings, and the San Jose Sharks, in that order.

The Flames were the first Canadian team to make it to the Finals since the Vancouver Canucks lost to the New York Rangers in 1994.

The first game, at St. Pete Times Forum, saw the Flames win the game, 4–1. Calgary only got 19 shots off against the Lightning defense, but more than one-fifth found the net. Martin Gelinas got Calgary on the board early, and they extended the lead to 3–0 in the second period on goals by Jarome Iginla, his 11th of the postseason, and Stephane Yelle. Chris Simon added the fourth and final Calgary goal after Tampa Bay's Martin St. Louis scored the lone Lightning goal.

Game two saw the same final score, but this time, it was Tampa Bay winning a clutch game to tie the series, 1–1, headed to Calgary. Ruslan Fedotenko's 10th goal of the postseason got the Lightning on the board first, and Tampa Bay used three third-period goals, coming from Brad Richards, Dan Boyle, and St. Louis, respectively, to blast the game open. The lone Calgary goal was scored by Ville Nieminen.

The series shifted to the Pengrowth Saddledome in Calgary, where Flames goalie Miikka Kiprusoff and the Calgary defense completely stonewalled the Tampa Bay attack, which only took 21 shots in a 3–0 Flames victory. Simon scored the first Calgary goal in the second period, and Shean Donovan and Iginla added goals to ice the game.

This was the first Stanley Cup Finals game in Canada since Game 6 of the 1994 Finals, when the Vancouver Canucks won at home against the New York Rangers.

With a chance to take a commanding 3–1 series lead, Calgary was shut out by Lightning goalie Nikolai Khabibulin, who recorded his fifth shutout of the postseason, a 29-save shutout, in a 1–0 Tampa Bay victory, with the game's lone goal being scored by Brad Richards three minutes into the game.

The series returned to Tampa Bay tied, 2–2, for a critical game five, and Calgary pulled off a 3–2 overtime victory to move within one win from the Stanley Cup. After Gelinas and St. Louis traded goals in the first period, Iginla scored for Calgary late in the second period. However, Fredrik Modin tied the game for the Lightning 37 seconds into the third period. The 2–2 score held until after 14:40 had gone by in overtime, when Oleg Saprykin's first goal since the first round won the game for the Flames.

Back to Calgary for game six, each team scored two second-period goals, with Richards scoring two for the Lightning and Chris Clark and Marcus Nilson for the Flames. In the third period, there was a dispute over a Martin Gelinas shot that appeared to have gone in. A review from one unorthodox camera angle showed the puck would appear to have crossed the goal line before Khabibulin's pad dragged it out, though another camera did show the puck had been knocked several inches above the goal line in front of Khabibulin's pad. Although it never was reviewed, it was officially inconclusive. The game entered overtime with the Flames needing only a single goal to win the Stanley Cup. Thirty-three seconds into double overtime, St. Louis put in the game-winner for the Lightning to force a winner-take-all game seven in Tampa Bay.

In a tense game seven, Fedotenko scored goals for Tampa Bay late in the first period and late in the second period for a 2–0 lead. After Conroy scored to narrow the deficit to 2–1, Calgary barraged Khabibulin after taking only seven shots in the first two periods. After the Conroy goal, Khabibulin stopped 16 Calgary shots. The series ended as Flames center Marcus Nilson missed a last-second opportunity to force overtime. Tampa Bay won the game, 2–1, and the Stanley Cup.

The Tampa Bay Lightning are currently the southern-most hockey team to ever win the Stanley Cup in history.

Tampa Bay clinched the Stanley Cup for the first time in their 12-year history with a 2-1 victory over Calgary in the deciding game seven of the series.

Ukranian Ruslan Fedotenko scored twice for the Lightning - the second with five minutes left in the second period.

The Flames fought back, Craig Conroy firing a blast from long range with just over 10 minutes left.

But despite nine shots on goal, the visitors failed in their bid to be the first Canadian winners since 1993.

It was a dramatic late turnaround for Calgary, who had managed just eight in the first 50 minutes.

Fedotenko blasted the puck past Calgary goaltender Mikka Kiprusoff 14 min 38 sec into the second period to give Tampa Bay a 2-0 lead after a perfect pass from Vincent Lecavalier.

Lightning captain Dave Andreychuk, whose 1,759 NHL games were the most for anyone without an NHL championship win, succeeded in his quest to have his name inscribed on the Stanley Cup.

The Lightning, one of the worst teams in pro sports for most of their 12 seasons, are the Stanley Cup champions. The still-young franchise won it with a very old formula, with their stars excelling in the biggest game of the season.

Ruslan Fedotenko scored twice, including the critical first goal just as he did in the conference finals, and the resilient Lightning held off the Flames 2-1 in Game 7 Monday night to win their first Stanley Cup. 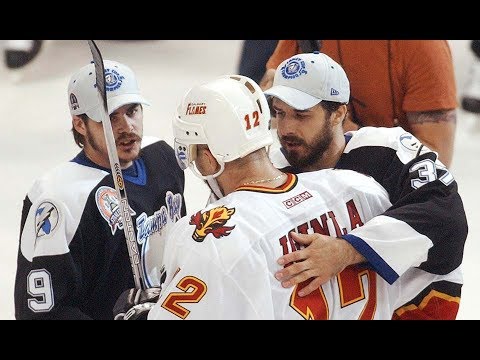 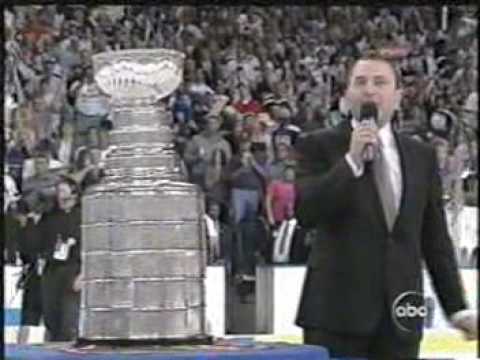 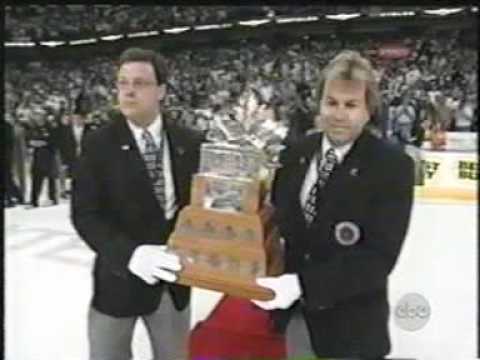 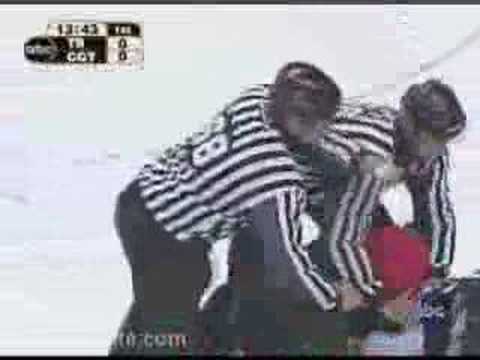