Alimta® is the very first chemotherapy drug to be approved by the Food and Drug Administration (FDA) to treat patients suffering from malignant pleural mesothelioma cancer.

Also known as Pemetrexed, Alimta® is administered to mesothelioma patients who are unable to undergo surgical procedures to remove cancerous tissue.

Developed in 2000, Alimta® has been hailed as a "huge breakthrough" in treating mesothelioma cancer patients. In clinical trials at Britain's Newcastle Freeman Hospital, Alimta® was administered to 27 British mesothelioma sufferers, most of whom were former construction workers. The use of Alimta® resulted in a rapid improvement of their symptoms. Trial leader Professor Hilary Calvert stated that half of the patients experienced a decrease in tumor size and that most of the patients had marked improvement in their symptoms. Professor Calvert called the trial's findings "the best results I've seen in my career."

Alimta (pemetrexed) is a chemotherapy drug that interferes with three folic acid related enzymes that work feed the cancer cell, the process that allows mesothelioma cells to spread.
Alimta is indicated, in combination with cisplatin, for the treatment of malignant pleural mesothelioma whose disease is unresectable or who are otherwise not candidates for curative surgery.
The recommended dosage is 500 mg/m2 administered as an intravenous infusion over 10 minutes on Day 1 of each 21-day cycle.

ALIMTA® is the first and only chemotherapy drug to be approved by the Food and Drug Administration (FDA) for the treatment of patients with malignant pleural mesothelioma. (MPM) When surgery is not an option, ALIMTA® is considered to be one of the most important drugs in the fight against the debilitating symptoms of the disease.

Used in tandem with the drug cisplatin, in clinical trials ALIMTA® was shown to extend the life of mesothelioma patients by a number of months and also provide them a better quality of life by addressing the symptoms of the disease, such as pain and shortness of breath.

The drug Alimta (pemetrexed) has been approved by the U.S. Food and Drug Administration to prevent progression of certain types of advanced or metastatic (spreading) lung cancer, the agency said Monday.

The drug, which hinders the needed absorption by certain tumors of B-vitamin folate, is newly approved for people whose tumor has shrunk or whose cancer has stabilized after chemotherapy.

Alimta was first approved in 2004 to treat the asbestos-linked cancer mesothelioma and, later, as an initial therapy for advanced non-small cell lung cancer, the FDA said in a news release.

Possible side effects may include blood cell damage, fatigue, nausea, loss of appetite, extremity numbness, and rash, the FDA said. 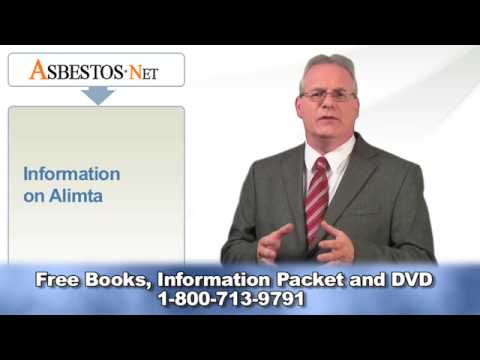