The venue was playing host to rock group Callejeros and around 3,000 people were in attendance. The blaze was started when a pyrotechnic flare (a popular device in New Year's Eve celebrations) was set off and ignited foam in the ceiling. The materials used in the building for decoration were flammable: mostly wood, styrofoam, acoustic panels and a plastic net (a so-called media sombra). This plastic net was hung from the ceiling and caught fire first, melting into a rain of fire. In some parts of the building, teddy bear stuffing was used as a cheap alternative to wool fiber. The owner and the band's lead singer had told the patrons not to use flares inside the building.

Four of the six doors, some of which were fire exits, were chained shut so that "people would not enter without paying", according to Mayor Aníbal Ibarra. Most of the victims died from inhaling poisonous gases, smoke and carbon monoxide, unlike most accidents of this kind, where most die from crushing or burning. Speculation was that there was a nursery room in the ladies' restroom but this has been proven false.

Following the disaster, an Argentine judge issued a national and international arrest order against Omar Chabán, local businessman and owner of República Cromañón and other nightclubs, including one called Cemento that had been closed by court orders many times before. Chabán was located at one of his houses in the neighbourhood of Montserrat and was arrested. Police are now seeking those responsible for setting off the flare. If they are found (some reports say they have already been identified and that they are children), then they could face eight to twenty years in prison.

More than 619 others were injured when the fire broke out late on Thursday, city officials said.

Up to 4,000 people, many of them teenagers, were inside the club for a New Year performance by rock group Los Callejeros, reports say.

Officials are investigating the possibility that emergency exits at the nightclub were locked.

Argentine Interior Minister Anibal Fernandez said the blaze may have claimed more victims because the exits had been tied shut with wire, Reuters news agency reports.

"It appears they were condemned to walk into a trap," Mr Fernandez said.

Buenos Aires Mayor Anibal Ibarra said the emergency exit appeared to be shut "so that people wouldn't enter without paying" and firefighters had to break it open, Reuters added. 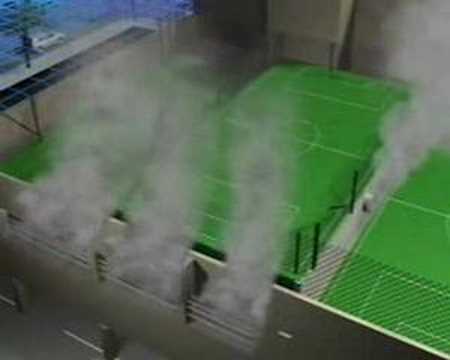