The next day, chief surgeon Christian Estripeau of Percy reported that Arafat's condition had worsened, and that he had fallen into a deeper coma.

Sheikh Taissir Tamimi, the head of the Islamic court of the Palestinian territories—who held a vigil at Arafat's bedside—visited Arafat and declared that it was out of the question to disconnect him from life support since, according to him, such an action is prohibited in Islam.

Arafat was pronounced dead at 3:30 am UTC on 11 November at the age of 75. The exact cause of his illness is unknown. Tamimi described it as "a very painful scene." When Arafat's death was announced, the Palestinian people went into a state of mourning, with Qur'anic mourning prayers emitted from mosque loudspeakers and tires burning in the street. One obituary at Socialist World said: "Many Palestinians will view the death of Yasser Arafat with a mixture of sadness and a wish that the Palestinian Authority he led, had done much more to end the poverty and oppression that blights their lives".

Mohammed Abdel Rahman Abdel Raouf Arafat al-Qudwa al-Husseini (Arabic: محمد عبد الرؤوف عرفات القدوة الحسيني‎, 24 August 1929 – 11 November 2004), popularly known as Yasser Arafat (ياسر عرفات) or by his kunya Abu Ammar (أبو عمار), was a Palestinian leader and a Laureate of the Nobel Prize. He was Chairman of the Palestine Liberation Organization (PLO), President of the Palestinian National Authority (PNA), and leader of the Fatah political party, which he founded in 1959. Arafat spent much of his life fighting against Israel in the name of Palestinian self-determination. Originally opposed to Israel's existence, he modified his position in 1988 when he accepted UN Security Council Resolution 242. 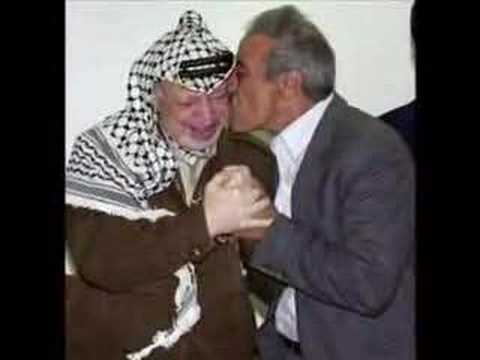