Mortal Kombat: Deception is a fighting game developed and published by Midway as the sixth installment for the Mortal Kombat (MK) series.

Deception was released for the PlayStation 2 and Xbox in October 2004, while a Nintendo GameCube version was published in March 2005. Mortal Kombat: Deception follows the storyline from the fifth installment, Deadly Alliance. The story centers on the revival of the Dragon King Onaga, who attempts to conquer the realms featured in the series after defeating the sorcerers Quan Chi and Shang Tsung, the main antagonists in the previous game, and the Thunder God Raiden, defender from realm. As such, the surviving warriors from the previous titles join forces to confront Onaga.

Twenty-six characters are available to play in the game, with nine making their first appearance in the series. Deception contains several new features in the series, such as chess and puzzle games with the MK characters and an online mode. The Konquest Mode role-playing game (RPG) makes a return from Deadly Alliance, but follows the life of Shujinko, a warrior who is deceived by Onaga to search for artifacts to give Onaga more powers. In November 2006, Midway released Mortal Kombat: Unchained, a port for the PlayStation Portable, which adds new characters to the game.

Series co-creator Ed Boon designed Deception to be an unpredictable fighting game, and included new features such as the mini-games as surprises. Several parts from Deadly Alliance such as combos and arenas were redesigned to be more realistic as well as more interactive. Deception has been well received by video game reviewers, who praised the fights and new features. The Konquest Mode, however, received criticism for poor voice acting. Several publications have awarded the game as the best fighting game in 2004.

The revisions to the fighting were subtle but substantial, and Mortal Kombat: Deception ended up as a much more viable competitive game. The cheesy impalements that allowed players to trade their weapons for a nasty hit were removed, and combo breakers allowed some limited escape from those relentless enemy attacks. Old fans were happy to see the return of the nasty uppercuts the early games were known for, and leg sweeps were once again made ubiquitous. The added balance was a major asset, as the series offered online play for the first time. While most agreed that it still wasn't the deepest or most refined fighter out, Deception had some real meat on its bones. 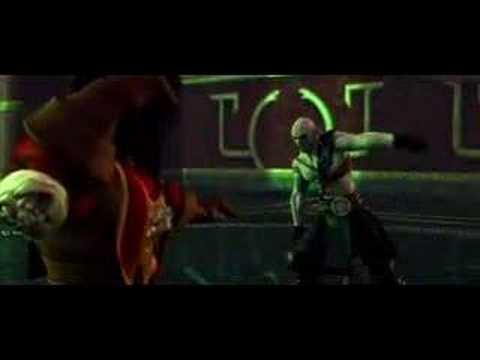