Volvo Cars introduced the Volvo V50 at the 2003 Bologna Motor Show as the station wagon version of the Volvo S40 small family car -- manufacturing both models at their facility in Ghent, Belgium.

For model year 2008, the V50 received revised front styling, minor modifications to the interior, optional active xenon headlights, audio systems, increased power and torque of the T5 engine, availability of the D5 with a 6-speed manual and a 1.8 Flexifuel engine.
For model year 2009, the V50 T5 is available in the US only as an automatic AWD model with the "R-Design" trim package, and within Europe with both manual and automatic options.

In Volvo nomenclature, "V" stands for "versatile." Versatility is great, but as the departed V40 wagon proved, it says nothing about excitement -- not when the other elements in the mix are drab sheet metal and mediocre performance. The Volvo V50 was conceived to replace this less-than-memorable small wagon, and it improves on the formula by offering more style and the opportunity for greater performance.

The compact V50 has been dubbed a "sport wagon" by Volvo. With its bulging fenders and grooved hood, this Volvo looks, dare we say, ripped. And it lives up to the "sport" part through its sharp handling and sprightly acceleration -- as long as you opt for the turbocharged engine, that is. With that turbo under its hood, the Volvo V50 feels nimble and brisk. Alas, the V50's normally aspirated base engine is far less impressive.

Still, with either power plant, this upscale small wagon is enjoyable on the inside, offering a design that's as ergonomically correct as it is distinctive. There are also plenty of safety features, with a lineup that includes side-impact and head curtain airbags, active head restraints and optional built-in booster seats for children. Combine all this with the utility offered by the available all-wheel drive, and Volvo's V50 distinguishes itself as providing plenty of "V" without being boring to drive or own.

The Volvo V50 shares a platform with the S40 sedan and C30 hatchback. V50 buyers have their choice of two trim levels. The base 2.4i delivers alloy wheels, a sunroof, a power driver seat, a leather-trimmed tilt-and-telescoping steering wheel, Bluetooth, a six-CD changer and full power accessories. The T5 AWD R-Design's additions include sporty exterior and interior styling cues, a sport-tuned suspension, automatic climate control, heated front seats and leather upholstery. The options list includes active bi-xenon headlights and a blind-spot warning system. Additionally, the T5 AWD R-Design can be equipped with a premium Dynaudio sound system and a navigation system.

The V50's base inline five-cylinder (the standard engine on the 2.4i trim level) provides 168 horsepower and 170 pound-feet of torque. Front-wheel drive is the default layout for this engine. Performance is adequate but uninspiring. The solution to this problem lies with the turbocharged, 2.5-liter inline-5 that's standard on the T5 AWD R Design. This engine sends a healthy 227 hp and 236 lb-ft of torque to all four wheels. All models come standard with a five-speed automatic transmission.

Volvo's Scandinavian roots are elegantly reflected in the V50's cabin. The feel is open and clean, highlighted by an unusually thin center stack. In true Scandinavian fashion, function goes hand in hand with form -- for the most part. A 60/40 split-folding rear seat helps the car easily digest oversize items; cargo capacity is competitive with that of others in this class, and controls are easily navigable. Materials quality is also quite good. The one negative here is that the wagon's minimalist aesthetic results in, well, a minimal number of storage areas within its cabin.

The Volvo V50 debuted for the 2005 model year. If you're looking for a used Volvo V50, there are a few changes of note. From 2005-'08, a front-wheel-drive T5 model was available alongside the AWD version. The T5's power output was originally 218 hp, but it got boosted to 227 hp for 2008. There was also an optional six-speed manual transmission for the T5 that was discontinued for the FWD model in '06, and the AWD model in '08. Other changes include standard stability control on all V50s for '07, and upgraded audio components and the optional blind-spot monitor for '08. Also, prior to 2009, V50s had considerably less standard equipment and commensurately lower base prices, and the R-Design styling flourishes were unavailable.

The Volvo V50 is a stylish wagon version of the S40. It continues to enhance Volvo's reputation as a maker of superb sports wagons. For 2010 the T5 AWD comes standard with a six-speed manual transmission and available five-speed auto.
The front-wheel drive 2.4i has a 168-hp 2.4-liter inline-five-cylinder engine matched with a five-speed automatic transmission. The all-wheel drive T5 is powered by a 227-hp turbocharged 2.5-liter inline-five engine with six-speed manual. The five-speed automatic transmission includes Geartronic, allowing driver selectable shifting. Safety features include electronic stability control, side-impact and side curtain airbags, and all-disc anti-lock brakes with electronic brake-force distribution. The V50 includes Bluetooth and HD radio and the T5 is only available with the unique R-Design package, enhancing appearance and comfort. 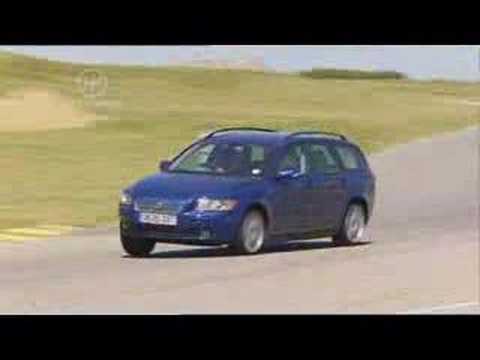