The Chrysler Pacifica is a mid-size crossover, introduced by Chrysler and marketed from model years 2004 to 2008.

The CUV was inspired by the 1999 Chrysler Pacifica and 2000 Chrysler Citadel concept cars.
Chrysler marketed the Pacifica as a “sports-tourer," building the vehicle at the Windsor Assembly Plant, alongside the long-wheelbase minivans from early 2003 through November, 2007.
Notably, the Pacifica was the first jointly engineered product of the 1998 Chrysler-DaimlerBenz "merger of equals." Chrysler developed the vehicle in 30 months at a cost below $1 billion.

The Pacifica's exterior was slightly restyled for 2007, including its headlights, hood, fenders, grille, front fascia and wheels. The brand new 4.0 L SOHC V6 engine was added, to complement the standard 3.8 L EGH V6. With the addition of the new engine and transmission, Dual Exhaust was added. New options included a rearview camera incorporated into the navigation system, YES Essentials (stain, odor, and static-resistant) seat fabric and new wheel options.

The Pacifica was the first jointly engineered product of the 1998 Chrysler-DaimlerBenz "merger of equals." Chrysler developed the vehicle in 30 months at a cost below $1 billion. DaimlerChrysler heavily touted the Pacifica as the next "big thing" in the fledging crossover market, forecasting sales of 100,000 per year. These estimations proved to be wildly optimistic, as sales never came close to expectations. There was stiff competition from similar vehicles, like the Infiniti FX, Nissan Murano, and Lexus RX330; the RX was the volume leader and widely considered the benchmark for the class. The initial production was plagued by quality flaws and glitches, giving the nameplate a poor reputation from the onset.
A three year, multi-million dollar contract was signed with singer Celine Dion in 2003, with advertisements designed to reposition Chrysler as a premium marque. However, the promotional campaign was widely considered a flop and so DaimlerChrysler ended it just one year later.
The Pacifica was designed to combine the convenience of a minivan, the elevated position of an SUV, and the handling of a sedan. Some unnecessary and expensive features were added, such as a navigation system and a load-levelling suspension. Compared to traditional (non-crossover) luxury SUVs such the Lincoln Navigator, the Pacifica had less heavy cargo-hauling capacity but otherwise it was superior in handling, comfort, interior, and amenities. However, the Pacifica was generally considered inferior to the Chrysler Town & Country minivan, for that class of vehicle. Despite the Mercedes-like interior and other Mercedes-derived technologies, however, the Pacifica may have been overpriced for its marque, as general public perception did not consider Chrysler a luxury brand like that of Lincoln, Lexus, and Mercedes.

The Chrysler Pacifica was one of the original large crossover wagons. In order to combine the driving attributes of a car with the utility offered by minivans and sport-utility vehicles, the Pacifica crossover had four front-hinged doors, an elevated seating position, five- or six-passenger seating and a choice of front-wheel drive or all-wheel drive.

Compared to other crossover wagons, the Chrysler Pacifica was relatively upscale and offered a wide array of creature comforts wrapped in elegantly chiseled sheet metal. Unfortunately, the Pacifica didn't possess particularly great interior packaging. While the first two rows were spacious for occupants, the third row was acceptable only for children and left very little space for cargo behind it when deployed. The rearmost seat does, however, fold flat into the floor in convenient 50/50 sections.

The Pacifica's Mercedes Benz-derived suspension garnered wide praise for its carlike ride and handling. But early Pacificas suffered from reliability woes and mediocre engines in a price bracket where potent and refined powertrains were the norm. Not helping matters were the large wagon's hefty weight and relatively unsophisticated four-speed automatic transmission, both of which took their toll on fuel economy. A significant update for 2007, however, brought about a new V6 engine, a new six-speed automatic for most models and updated styling.

The Chrysler Pacifica debuted for the 2004 model year, at which point it was offered only in base and Limited trim levels. The original base model was relatively well-equipped, but it was offered with fewer features and a lower price when the Touring trim level slotted in above it in 2005. At first, Pacificas were powered by a 3.8-liter V6 with 210 horsepower and 240 pound-feet of torque. Reviewers faulted the gruff engine, which was barely up to the task of battling the Pacifica's formidable mass, especially on fully loaded all-wheel-drive models. Given that early 2004 Pacificas also had some well-known repair issues, we'd play it safe and restrict our search to 2005 and newer models.

Base 2004 Pacificas featured two-row, five-passenger seating and were fairly comfortable, thanks to niceties such as dual-zone climate control, a power driver seat and a load-leveling suspension. Starting in 2005, Touring models received additional standard features, a much longer options list and six-passenger seating via the addition of a two-passenger third-row seat and the replacement of the regular second-row bench with two bucket seats and a center console. The 2005 base model, meanwhile, lost some standard accoutrements and was priced lower going forward. The best-dressed and most luxurious Chrysler Pacifica was the Limited, which featured cleaner styling, bigger wheels and a long list of luxury features, including an upmarket audio system and a power liftgate.

In Chrysler Pacifica reviews, our editors found the crossover wagon's strengths to be its exceptional comfort for four, sedanlike driving characteristics, top-notch safety scores and upscale interior. The 3.8-liter engine is to be avoided, but the 3.5-liter and 4.0-liter V6s are decent performers. Downsides include a lack of legroom in the third row and a lack of overall utility when compared to the top available minivans. 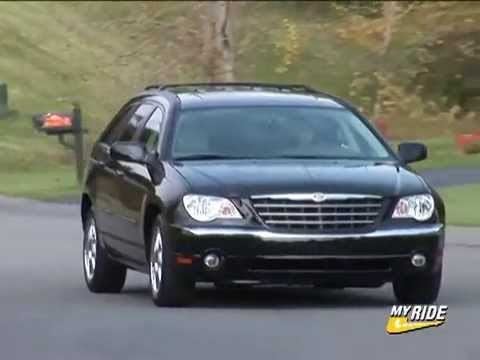