A Serbian man has confessed to the killing of Anna Lindh, the Swedish foreign minister who died after being stabbed in a Stockholm department store last September.

Mijailo Mijailovic, 25, ended months of stubborn denial after reading volumes of forensic evidence linking him to the murder.

The announcement came as a relief to Sweden: it means that a trial can go ahead, perhaps as early as this month, and a traumatic chapter in one of Europe’s most orderly and placid societies can be quickly closed.

Mr Mijailovic, who has a Swedish passport, comes from a family of Serbs and Montenegrins that has worked in Sweden for three generations.

An unidentified assailant stabbed Foreign Minister Anna Lindh as she shopped in a department store here today in an attack that stunned many Swedes and rekindled memories of the killing of Prime Minister Olof Palme in 1986.

While the motive behind the attack was unclear, an emotional Prime Minister Goran Persson ordered a halt in campaigning for a referendum on Sunday in which Ms. Lindh, 46, had been a leading voice in favor of adopting the euro.

''It's a serious situation,'' Mr. Persson, a Social Democrat, said at a news conference. ''The attack on her is an attack on our open society.''

The police said a tall man wearing a military camouflage jacket lunged at Ms. Lindh as she shopped for clothes at a designer outlet in the upscale NK department store in central Stockholm this afternoon. The assailant fled.

The man who admitted knifing Swedish Foreign Minister Anna Lindh in a Stockholm department store has been jailed for life for murder.

Mijailo Mijailovic, 25, had denied murder, insisting he carried out the attack because of "voices in his head".

But psychiatric tests declared he was sane when he carried out the attack last September.

A court in Stockholm ruled on Tuesday that he was guilty of murder, not manslaughter.

THE man who killed the Swedish foreign minister, Anna Lindh, attacked her savagely, inflicting wounds to her chest and abdomen, a coroner said yesterday, a day after the defendant denied that he had intended to kill.

Mijailo Mijailovic, 25, has confessed to the attack on 10 September while Ms Lindh was shopping in a Stockholm department store.

Mijailovic slashed her with at least five thrusts, the coroner, Henrik Druid, said on the trial’s second day. 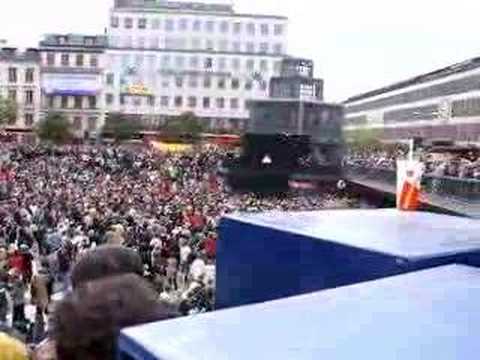