The Devils defeated the Mighty Ducks in seven games to win their third Stanley Cup in less than a decade.

The Devils win was seen as the peak of the Devils/Colorado Avalanche/Detroit Red Wings Stanley Cup era from 1995 to 2003, as the three teams won a combined 8 Stanley Cups during that time. The Devils won in 1995, followed by the Avalanche in 1996, then the Red Wings in 1997 and 1998. After the Dallas Stars won in 1999, the four-year cycle repeated as the Devils started it again in 2000. This series also had a sense of irony in that 20 years earlier, in the Devils first season in New Jersey, they were defeated by Wayne Gretzky's Edmonton Oilers which concluded with Gretzky calling the New Jersey Devils a "Mickey Mouse Organization", and in this Stanley Cup Finals, the Mighty Ducks were owned by the Disney Company.

The New Jersey Devils were in the finals for their fourth time after defeating the Boston Bruins and Tampa Bay Lightning in five games, and beating the Ottawa Senators in the Eastern Conference Finals in seven games. Strong goaltending from Martin Brodeur, and strong defense from captain Scott Stevens and Scott Niedermayer led the way.

The Mighty Ducks of Anaheim entered their first Stanley Cup Final in franchise history after upsetting two heavily favored teams: sweeping the defending Stanley Cup Champions, the Detroit Red Wings, defeating the Dallas Stars in six games, plus sweeping the upstart Minnesota Wild in the Western Conference Finals thanks to the stellar goaltending of Jean-Sebastien Giguere, only allowing one goal during the entire series. Backing up Giguere were players such as Paul Kariya, Petr Sykora, Adam Oates, plus Rob Niedermayer, brother of then-Devils star defenceman Scott Niedermayer. This series was memorable for two brothers on different teams competing for the same prize.

This was the third coast-to-coast Stanley Cup Final, after 1982 and 1994. Both times, the Vancouver Canucks had Cinderella runs halted by New York teams: in 1982 by the Islanders, being swept, and in 1994 by the Rangers, losing in 7, though they overcame a 3-1 series deficit in that series. However, this was the first coast-to-coast final played entirely in the United States.

Martin Brodeur kept the Ducks off the score board while the Devils players continually dominated the Ducks. The Devils shut out Anaheim 3-0.

Like in Game one, Brodeur kept the Ducks off the scoreboard and shut out the Ducks 3-0.

Game three was remembered for the clumsy mistake from Martin Brodeur when he accidentally dropped his stick when the puck came to him, the puck deflected off his fallen stick and into the net to give the Ducks a lucky break and a 2–1 lead. The Devils would later tie the game, but lose in overtime. Over the mistake with his stick, Brodeur later claimed, "It was just one of those once in a lifetime things."

Game four had no scoring throughout regulation and was a battle between goaltenders Brodeur and Giguere. But Anaheim again came out on top in overtime, winning 1–0 and tying the series.

Game five, at the Meadowlands saw a continual battle for the first half the game. With the game tied 3–3 in the second period, the Devils took the lead with a deflection goal by Jay Pandolfo that was initially waved off by referees due to a kicking motion dispute with the skates, but replays showed there was no distinct kicking motion from the skates, thus the goal counted. This would prove to deflate the Ducks for the rest of the game, as Jamie Langenbrunner scored two more goals for the Devils to give New Jersey a 6–3 win and a 3–2 series lead.

With New Jersey looking to clinch the series, game six at Anaheim saw the Mighty Ducks return the favor of game five to the Devils with complete dominance throughout the game. Quite possibly the most remembered moment of the entire series came when the Ducks were winning 3–1 in the second period. Ducks captain Paul Kariya didn't see Scott Stevens coming after he passed the puck and was leveled by the Devils captain in a hit similar to the check that knocked out Eric Lindros during the 2000 playoffs and caused Lindros to miss the next season. Kariya was lying motionless for a few minutes, then was escorted to the locker room. Kariya unexpectedly returned to the bench minutes later. When he did, CBC broadcaster Bob Cole said, "Paul Kariya is back!" About eleven minutes after the hit, fired a slap shot that found the back of the net. The crowd at the Arrowhead Pond erupted as ABC broadcaster Gary Thorne said, "Off the floor, on the board!" This helped the Ducks win the game 5–2 and now put the Ducks within one game of clinching.

Game seven on New Jersey home ice saw the Devils once more completely dominate the Ducks. The game winning goal was scored by Michael Rupp. Rupp become the first player in Stanley Cup history to have his first playoff goal be the Stanley Cup winning goal. Jeff Friesen dominated his former teammates with two goals. The 3–0 win gave the Devils their third Stanley Cup victory as Anaheim could not complete their Cinderella run. However, the Mighty Ducks wouldn't leave empty handed; for his stellar play throughout the playoffs and finals, Jean-Sebastien Giguere for the Ducks was awarded the Conn Smythe Trophy as the MVP of the playoffs. He became only the fifth player, and fourth goaltender, in NHL history to have won the trophy as a member of the losing team. Many were surprised by the Conn Smythe trophy being awarded to the losing team. However, many experts felt that the Devils votes were distributed among many players who had played well in the series.

This was the first time since 1965 that all the games in the finals were won by the home team.

The New Jersey Nets were in the NBA Finals for the second year in a row at the same time the Devils won the Stanley Cup, but lost to the San Antonio Spurs in 6.

Because pro sport is designed and packaged for television, it is easy to forget that the games sometimes generate great drama without any help from the wizards in the broadcast truck. Game seven of the Stanley Cup Final is one such occasion. A decent level of excitement is guaranteed simply because of what's at stake.

Game seven between the New Jersey Devils and Anaheim Mighty Ducks delivered reasonably well on the ice too, with two good periods of hockey and an unlikely star in the Devils' Mike Rupp, who had a three-point night.

Rupp was an appropriate hero for the last game of the 2002-2003 NHL season, because this Stanley Cup series was an unlikely one to the end.

It was a showdown almost bereft of stars. It was a series that featured three shutouts and 16 goals in two games. The Ducks' unbeatable goalie, J.S. Giguere, suddenly revealed a five-hole you could drive a truck through. Most importantly, the teams combined for a pretty entertaining seven-game ride, something that was impossible to envision after the first two games.

With their 2003 championship, the Devils rival the Detroit Red Wings as the most successful NHL franchise of the past decade.

The Devils, riding the greatest home-ice advantage in NHL playoffs history and a goal from one of the unlikeliest Game 7 stars ever, ended the Mighty Ducks' remarkable playoff run and won the Cup with a 3-0 victory Monday night.

Mike Rupp, who hadn't played in the postseason until unexpectedly being called in Game 4, scored the first goal and set up Jeff Friesen for the other two. Friesen scored five goals in the series, all at home.

The Devils swept all four games at home -- all with the second period proving decisive -- in the first finals since 1965 and only the third in which the home team won every game. The Ducks rallied from 2-0 and 3-2 deficits to force a Game 7 by winning all three games in Anaheim. 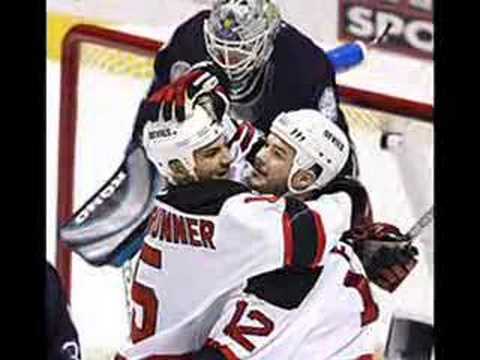