The US-led Invasion of Iraq Begins

At approximately 02:30 UTC, or about 90 minutes after the lapse of the 48-hour deadline, at 5:30 am local time, explosions were heard in Baghdad.

According to The Pentagon, 36 Tomahawk missiles and two F-117 launched GBU-27 bombs were used in this assault. The targets were high-level Iraqi governmental officials, including Saddam Hussein himself, and were based on specific intelligence which led the U.S. government to believe it knew his movements. Civilian buildings were also hit. Later, on May 29, 2003, CBS Evening News reports that the bunker never existed.

At 03:15 UTC, or 10:15 p.m. EST, President George W. Bush stated that he had ordered the coalition to launch an "attack of opportunity" against specified targets in Iraq. The military action was dubbed "Operation Iraqi Freedom".

It was later announced that Special Forces troops were operating inside Iraq; Australia, the United Kingdom and the U.S. all had Special Forces troops in the area. Soon after the strike on Baghdad, Iraq launched a number of missiles at targets in Kuwait, including the coalition forces stationed there. The coalition reported that they caused no damage. Later in the day, both UK and U.S. ground troops moved into the demilitarised zone between Iraq and its neighbour, Kuwait, and then into Iraq itself. During the night, eight British and four American troops were killed when a transport helicopter crashed.

Protests take place around the world. In Australia, they take such forms as a "NO WAR" slogan being painted on the Sydney Opera House, Greenpeace demonstrators chaining themselves to the gates of the Australian Prime Minister's residence (the Lodge) and a former Navy officer burning his uniform outside Australia's Parliament House. In Denmark, Prime Minister Anders Fogh Rasmussen is sprayed with red paint for his pro-US stance. In the United Kingdom, Tony Blair survives a rebellion within his own party to win parliamentary support of war actions in Iraq. 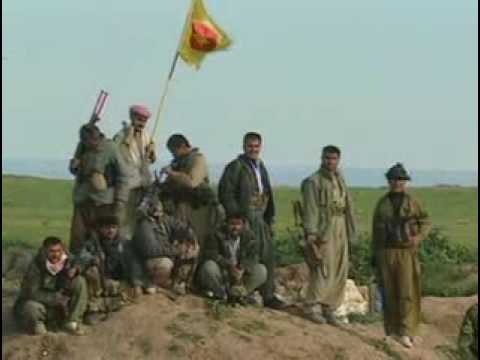