46664 (four, double six, six four) is a series of AIDS charity concerts played in honour of Nelson Mandela by South African musicians in the 2000s.

Mandela was imprisoned on Robben Island in 1964, and was the 466th prisoner to arrive that year. The prison administration's scheme of numbering prisoners was to follow the sequence number of the prisoner (466 in his case), with the last two digits of the year (64).[1]
The number was imposed on him by the prison for over 25 years, until his release in 1990. "Prisoner 46664" continues to be used, as a reverential title for him, and the Nelson Mandela Foundation uses 46664.com as its website address.
Shortly before Joe Strummer's death, he and U2's Bono co-wrote the song "46664" for Mandela as part of the campaign against AIDS in Africa.

On 29 November 2003 an event called the 46664 Concert was held at Green Point Stadium, Cape Town. It was hosted by Mandela and its goal was to raise awareness of the spread of HIV/AIDS in South Africa.

Who
46664 is Nelson Mandela’s global HIV/AIDS awareness and prevention campaign.
What
The 46664 campaign is an initiative to inspire individual and collective action towards an AIDS-free world. At its core, the campaign is about bringing hope and inspiration to all affected by HIV/AIDS. Thus 46664 raises awareness about the HIV/AIDS pandemic and the underlying issues that influence it, such as poverty, lack of education, gender inequality, lack of access to health facilities and the denial of economic opportunities. 46664 achieves its objectives through outreach campaigns in Africa and beyond, as well as through the staging of multi-artist concerts, sports and entertainment events and fundraisers. The campaign uses the universal connecting power of music, sport, entertainment and celebrity to educate, engage and empower those infected and affected by HIV/AIDS, and draws upon an extensive global network of ambassadors and celebrities. International ambassadors have the power to raise awareness and educate the younger generation in particular. By gaining global backing for the cause, 46664 looks to raise funds to directly assist the many HIV/AIDS projects it supports.
Why
The 46664 campaign began in 2002 when Mr Mandela realised that to reach the youth of the world he needed to engage the support of the people who most appeal to them.
History
46664 (four, double six, six four) was Nelson Mandela’s prison number when he was imprisoned on Robben Island, off Cape Town in South Africa.

He was jailed in 1964 for 27 years for leading the liberation movement against apartheid and for his impassioned stance on the rights of everyone to live in freedom. He was prisoner number 466, imprisoned in 1964. The Robben Island prisoners were never referred to by their names, but rather by their numbers and year of imprisonment – hence 46664 was Mr Mandela’s number.

This was typical of the strategy of the apartheid regime, to reduce its opponents to nameless numbers.

It was for precisely this reason that Mr Mandela decided to use this powerful, symbolic number in the fight against HIV/AIDS. Through this simple, poignant means he has demonstrated and communicated to the world that people must never be reduced to simple numbers – we are human beings, all equal, and those infected and living with HIV/AIDS have the same right to live and to be treated as equals.

This is how the number 46664 became the icon for promoting Mr Mandela’s global HIV/AIDS awareness campaign.

He famously handed over the fight at a concert in Hyde Park, London, in 2008, with the words “It’s in our hands”. 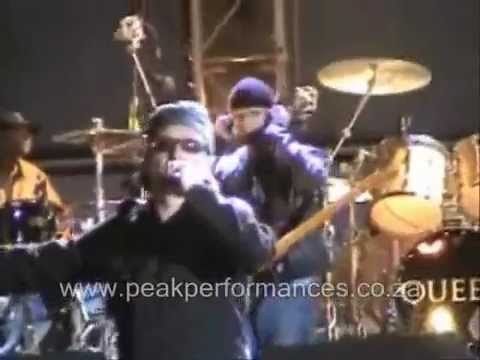