It was directed by Prachya Pinkaew, featured stunt choreography by Panna Rittikrai and starred Tony Jaa. Ong-Bak proved to be Jaa's breakout film, with the actor hailed internationally as the next major martial-arts star. Jaa went on to star in Tom-Yum-Goong (called The Protector in the US and Warrior King in the UK) and directed a sequel to Ong-Bak, Ong-Bak 2.

After Ong-Bak became a hit in Thailand, sales rights for outside Asia were purchased by Luc Besson's EuropaCorp, which in turn re-edited the film.

Most of the subplot involving Muay Lek's sister, Ngek, was removed, and the final showdown between Ting and Komtuan's bodyguard was shortened. The French company also rescored the soundtrack with some hip-hop sounds, replacing the Thai rock score, and it's this version that has been made available in the United States and most of the Western world.

For the United Kingdom release, the soundtrack was scored yet again, this time with an orchestral score, but the film was left uncut with the subplot of Ngek.

The Hong Kong cut of the film's theatrical release omits a "bone breaking" sequence toward the end, where George's arm is snapped and Ting in turn snaps the leg of a bad guy. DVD releases in Hong Kong have the scene restored.

An "alternate ending" offered on the Thai, Australian, and UK DVD releases has George surviving. He is seen at the end bandaged up, limping, with his arm broken, supported by his parents. Prachya Pinkaew stated in an interview that although there was debate, they ultimately decided it would be appropriate for him to make a meaningful sacrifice for the village. 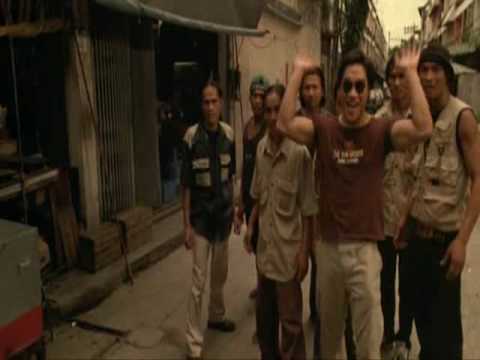