The most long-awaited and carefully prepared Glastonbury Festival took place in wonderful weather.

The ring of steel fence repelled all non ticket holders and 140,000 legitimate festival goers revelled in the space and security created by the widely praised new operational management structure. Tickets were put on sale in February and sold out in weeks.

In 2002, the festival returned after a hiatus, with the controversial Mean Fiddler now handling the logistics and security — especially installing a substantial surrounding fence (dubbed the "superfence") that reduced numbers to the levels of a decade earlier. The lower attendance led to a much more relaxed atmosphere and massively reduced crime levels compared to previous years. There were some incidents outside the fence involving frustrated individuals who arrived at the festival assuming they would be able to jump the fence, but despite this the event was hailed as a great success by the media companies that had taken an interest in the festival. 2002 also saw Coldplay headline the Pyramid Stage for the first time. The show was closed by a set from Rod Stewart on the Sunday night. 2002 also saw the introduction of the inflatable cinema screen. 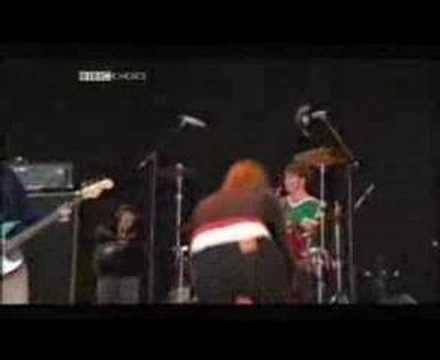