"Uncensored!" was the theme for the 2002 Pride Toronto celebrations.

J.P. Hornick and Rachel Aitcheson of the Toronto Women's Bathouse Committee are this year's Grand Marshals, while the Glad Day Bookshop is the Honoured Group. Coinciding with Canada Day celebrations, the opening of Dundas Square, and with an extended parade route, this year's Pride Parade is expected to break all records. Come on out, and help us make her/history!

We had the marvelous opportunity of following the Equal Marriage float at Toronto's Pride all along the parade route on Sunday in Toronto. We were not on the float but about 20 feet after it in the ideal position to observe what happened.

Kevin Bourassa and Joe Varnell organised this float as a kind of garden marriage scene, peopled by a collection of interesting guests (Anne and Elaine Vautour, Doug Elliott, Gail Donnelly and Barb McDowall, Marc Hall, Joanna Radbord, Joe and Kevin, a priest played by Doug's better half and a scattering of others). To complement the visual scene, they also had a sound track which was a mix of low key dance beat music, overdubbed with TV sound bites and interview snippets about equal marriage.The whole was nice to look at and easy to listen to. (We have never heard an "tailored information" sound track at a Pride before and it was quite effective, as well as original in concept). And, from where we were situated, we could see and hear the crowd's reaction to the float very well. 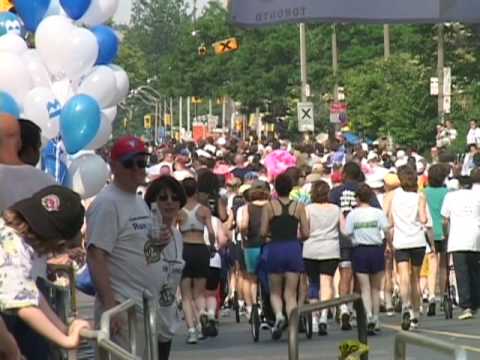 View other events that happened in June 2002