"Peanut Butter Jelly Time" was a Flash animation created by Ryan Gancenia Etrata and Kevin Flynn posted onto the Offtopic.com forums in early 2002.

On March 21, 2002, a user by the name YrebWarts posted Etrata and Flynn’s work on Newgrounds.com where the clip became wildly popular spawning a number of remakes, and became an Internet phenomenon. Based upon a song of the same name recorded by DJ Chipman of the Buckwheat Boyz, the best known version of the animation (usually distributed as a Flash clip) shows a highly pixelated animated Dancing Banana moving back and forth to the song's repetitive chorus. In some versions of the animation, the song's lyrics are displayed on screen. The line "peanut butter jelly with a baseball bat" is copied from The Ramones "Beat on the Brat" (with a baseball bat); although, in the Peanut butter jelly instance, it doesn't rhyme (or make sense)." 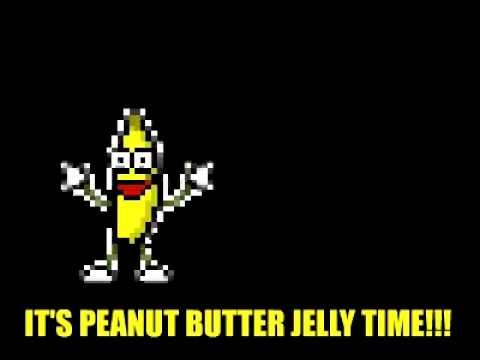