Quarterback becomes first Trojan to win the award in 21 years.

NEW YORK - Carson Palmer capped his rise from mediocrity to stardom by winning the Heisman Trophy on Saturday night, taking the bronze statue back to the West Coast for the first time in 21 years.

The Southern California quarterback became the first player from the region to win college football's most prestigious award since running back Marcus Allen did it in 1981.

Palmer went 16-16 as a starter before his senior season, unable to live up to all the expectations he brought with him when he joined the Trojans.

Carson Palmer can forget those first three seasons at USC, when he lost as much as he won and failed to fulfill the high expectations.

The Heisman Trophy does that for a player.

Palmer capped his rise from mediocrity to stardom by winning college football's most prestigious award Saturday night, taking the bronze statue back to the West Coast for the first time since USC's Marcus Allen did it 21 years ago.

The quarterback completed nearly 63 percent of his passes for 3,639 yards and 32 touchdowns with 10 interceptions this year. His biggest performance was his last against Notre Dame in a nationally televised game.

He kissed his fiancee, then stepped up to the podium and accepted the trophy.

Southern California quarterback Carson Palmer has been named the winner of the Heisman Trophy, college football's most prestigious individual honour.

The award was presented on Saturday evening at the Yale Club in New York City.

Palmer, who is the first West Coast player to win the coveted award since Trojans' running back Marcus Allen in 1981, led USC to a 10-2 mark and will face Banks and Iowa in the Orange Bowl.

My heart's about to come out of my shirt. This has been amazing, this whole journey through this season.” 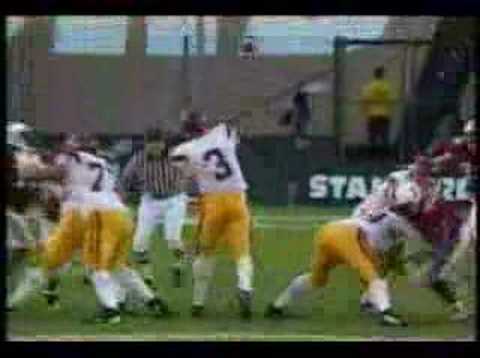