The Chrysler Sebring is a line of mid-size cars sold by Chrysler.

The Chrysler Sebring was introduced as a coupe for 1995, and later, a convertible was released for 1996. Both models replaced the Chrysler LeBaron. The convertible was built off of the Chrysler JA platform also used for the Cirrus sedan, while the coupe was based on the Mitsubishi Eclipse. The Chrysler Sebring was named after Sebring, Florida, the site of the renowned endurance car race called the 12 Hours of Sebring. The name was first used by Chrysler Corporation's Plymouth division trim line of the Satellite mid-size coupe of the 1970s.

Coupe (1995–2000)
The 1995 through 2000 Chrysler Sebring and Dodge Avenger coupes were the successors to the Chrysler LeBaron coupe and Dodge Daytona, respectively. The name Sebring was originally used on a model of the Plymouth Satellite.
Despite being similar to Dodge's Avenger, the Sebring's suspension was tuned slightly on the softer side, compared to Avenger's stiff suspension. The model was seen as performing the best out of the two, because its suspension offered a good balance of comfort and rigidness. Although the Sebring did not really offer true "off-the-line" muscle, it did handle quite well over long, curvy roads, offering minimal body roll, especially LXi models, which featured a slightly differently tuned suspension along with 17 inch wheels wrapped with Good-Year Eagle performance tires.

The Coupe version of the Sebring had seating for 5 and was considered to be one of the larger, more roomy coupes available. Trunk capacity was similar to that of many mid-size cars, capable of handling more than one set of golf clubs.
Although said to be built on a stretched Eagle Talon platform (which is not entirely untrue), it is more accurate to say that their platform was based on the 4-door Mitsubishi Galant platform. With this said, these cars do, however, share a great deal with their Talon sibling, including much of their dash and instrument panel, along with select suspension and steering components.

The Sebring convertible was launched in 1996 as sister car to the Chrysler Sebring Coupe, although the Sebring coupe and convertible didn't share many components or any sheetmetal. This model was unique to Chrysler, as unlike other Chrysler brand cars, no Dodge or Plymouth counterpart was offered. In mexico, a rare option was a turbocharged 2.4 4cyl.

The Sebring name was now used on three different cars for 2001. The coupe was based on the Mitsubishi Eclipse while the sedan and convertible were Chrysler JR platform successors to the Chrysler Cirrus. The Sebring sedan is also a de facto successor to the Plymouth Breeze, since most Plymouths (e.g. Voyager, Prowler) were rebranded as Chryslers after the marque's demise in 2001. The car got a facelift in 2004 by getting a new front fascia, as well as a Chrysler logo on the rear. The Sebring coupe was discontinued after 2005. The Sebring is sold as the Chrysler Cirrus in Mexico.
The Insurance Institute for Highway Safety gives the 2001-2006 Sebring an Acceptable overall rating in frontal crash tests. In the side impact test a Poor overall rating was given to models without side airbags. The IIHS did not test the Sebring with side airbags since Chrysler declined another test.

For 2001, the Sebring Convertible was redesigned, and it now shared most of its sheetmetal with the sedan, though it still differed greatly from the coupe, with the front fascia and most of the interior being the only thing these cars had in common. Many interior and exterior components were carried over from the first generation car, though the body shell underneath is significantly different. The Sebring received minor styling revisions (mostly the appearance of the nose) for the 2004 model year.

The Sebring was replaced with a new model based on the JS platform for the 2007 model year. Because no 2007 convertible was offered, the 2006 Sebring convertible was left to fill the void, remaining in showrooms and on the company's website until the 2008 model's release. The new Sebring borrows many styling cues from the 2003 Chrysler Airflite concept. It also has several Chrysler-signature styling cues, several of which come from the Chrysler Crossfire. Additionally, the new Sebring is the first Chrysler model to offer Chrysler's "MyGig" infotainment system.
The Chrysler Sebring is assembled in Sterling Heights, Michigan and contains over 82% of parts sourced in North America.
The convertible version was introduced in 2007 as a 2008 model, and for the first time featured an optional power hardtop in addition to the available cloth and vinyl tops.
2008 marks the first year that the Sebring is available with optional "MyGIG Multimedia Infotainment System" which allows you to store 20GB of music, DVDs, and pictures.
Chrysler offers three engines for the 2007 Sebring, the 2,360 cc (2.36 L; 144 cu in) GEMA I4, the 2,736 cc (2.736 L; 167.0 cu in) EER V6, and the 3,518 cc (3.518 L; 214.7 cu in) EGJ V6. The 3.5 L V6 is coupled to Chrysler's first ever 6-speed automatic transmission, which employs Autostick technology, and the 2.7 L V6 is capable of running on cleaner-burning E85. Export vehicles will be offered with a 2.0 L turbocharged common-rail diesel made by Volkswagen and the 2.0 L GEMA engine. The 3.5L V6 sedan is available with all wheel drive as an extra cost option for 2008 only. AWD will be dropped from the Sebring lineup in 2009 due to low demand.
The Sterling Heights plant will not be included in the sale of the company to Fiat. It will be leased by what is being called "new Chrysler" until the end of 2010, at which time the plant will close. On November 4th, 2009, Fiat announced that the Sebring will be remade in 2010. The Sebring will be continued with a redesign in 2011, and the Chrysler 200C EV Concept will possibly be the successor and sold under the Sebring name; however, a total redesign of the vehicle is more likely so its corporate/platform cousin, the Dodge Avenger, may also be redesigned.

A domestic mainstay in the midsize segment, the Chrysler Sebring is one of only a handful of reasonably priced vehicles to be offered as both a sedan and a convertible. There have been some Sebring highlights over the years, including the fun-in-the-sun convertible and the second-generation coupe, which shared a platform with the Mitsubishi Eclipse. But overall, while the Sebring may not cost as much as other midsize cars, it likely won't be as satisfying, either.

The current Chrysler Sebring is the result of a full redesign that was undertaken in hopes of making it more desirable and competitive. Alas, these hopes were quickly dashed. Mediocre performance and cut-rate interior materials drop the Chrysler Sebring to the basement among midsize family cars. The convertible is more appealing, as it's one of the few affordable drop tops with a legitimate backseat, and it also offers a retractable hardtop. Nonetheless, while Chrysler still makes some wholly competitive products, the Sebring lineup is, for the most part, not among them.

The Chrysler Sebring sedan is available as a sedan, soft-top convertible or hardtop convertible in LX, Touring and Limited trim levels. Base Sebrings start out reasonably well-equipped with full power accessories, front side-impact and full-length head curtain airbags, a tilt/telescoping steering wheel, a six-CD changer and, on the convertible, a power vinyl top. Touring models get 17-inch alloy wheels and a lengthier options list, while the top-of-the-line Limited features leather trim, automatic climate control and a premium audio system. Options include a 20-gigabyte hard-drive-based navigation/audio system, and in lieu of the aforementioned vinyl top, Sebring convertible buyers can opt for a power cloth top.

Standard on most Chrysler Sebrings is a 2.4-liter inline four-cylinder engine rated for 173 horsepower. Optional on the Sebring Touring sedan and standard on Sebring Touring and Limited convertibles, is a 2.7-liter V6 good for 189 hp. With either of these engines, a four-speed automatic transmission routes power to the front wheels. Available on Limited models only is a 235-hp 3.5-liter V6 backed by a more sophisticated six-speed automatic transmission. Fuel economy is below average for all these engines, with the 3.5-liter being particularly poor -- when equipped with all-wheel drive, it delivers gas mileage worse than a 430-hp Corvette.

In reviews, we've found that ride quality is among the Sebring's strong points, as it proves both comfortable and composed at freeway speeds. Braking and handling are just average, though. The softly sprung Sebring exhibits plenty of body roll around corners -- not that most buyers will care. Cabin space is generally on par with the rest of the midsize car class, as the Sebring sedan offers respectable amounts of headroom and legroom. Front seat occupants in the Chrysler Sebring convertible will find the quarters similarly roomy, but the drop top's rear seat has considerably less legroom and can accommodate only two passengers. Cabin design is ergonomically sound, but the quality of the interior plastics is poor for this price range.

The current third-generation Chrysler Sebring sedan was redesigned for the 2007 model year. The convertible sat out '07, returning as a 2008 model with an optional retractable hardtop, and a six-CD changer became standard in 2008. Notably, antilock brakes weren't standard across the lineup until 2009.

In 2001 Chrysler introduced the second-generation Sebring sedan and reworked coupes and convertibles powered by updated engines and transmissions. The coupe shared a platform with Mitsubishi's Eclipse. At the top of the heap was a 3.0-liter V6 cranking out 200 hp. It was initially available only in the LXi coupe. Standard in convertibles and LXi sedans was the Chrysler-built 2.7-liter V6 rated at 200 hp. A 2.4-liter four-cylinder was also available. In early reviews we praised the Sebring for its good looks, solid performance, competitive pricing and wide range of body styles.

Minor updates followed in successive years, and Chrysler shuffled the trim levels on a nearly annual basis: The familiar Sebring LX and LXi models ultimately gave way to GTC, TSi, Touring and Limited trim levels. Note that the Sebring coupe was discontinued after the 2005 model year, while the Sebring convertible and sedan continued through 2006.

As time went by, the second-generation Chrysler Sebring became increasingly uncompetitive. In later tests, we found that its drivetrains were unrefined; its ride quality was harsh (particularly in the sedan); and its build and interior materials quality were well below average. Though it wouldn't hurt for used-car shoppers to take a look at the Sebring -- especially those interested in the model-year range of the late '90s to early 2000s -- it's probably wise to consider other options before making a final decision.

The original Sebring was launched in 1995 as Chrysler's new midsize coupe. Mechanically, it was related to the Mitsubishi Galant of the same period. Available in LX or LXi trim, the Sebring coupe came with a 163-hp, 2.5-liter V6 and a standard four-speed automatic. At the time, the vehicle's best attributes were its sporty and purposeful exterior styling and roomy (for a coupe) interior. Despite a steeply raked windshield and roof line, headroom fore and aft was adequate even for adults, and the trunk impressed us with its size. The biggest downside was the V6's marginal performance.

The first-generation Chrysler Sebring convertible debuted a year later. However, this model was based on Chrysler's own platform, which was related to the Breeze/Cirrus/Stratus compacts. At the time the car brought class, dignity and a bit of luxury to this otherwise whimsical segment, and it became quite successful. 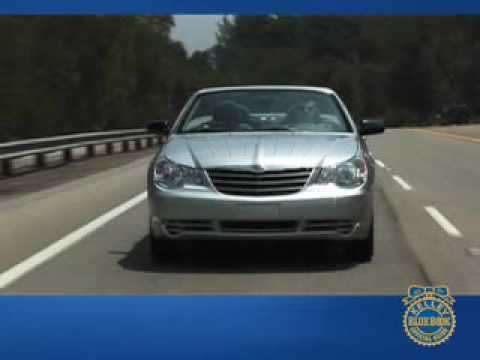