Take Two for Tinseltown Nobody's perfect, not even the Los Angeles Lakers.

They sure came close, though.

The winningest postseason run in NBA history came to a conclusion Friday night. The Lakers, looking as dominant and unbeatable as they had for nearly three months, finished off the Philadelphia 76ers 108-96 in Game 5 of the NBA Finals for their second straight title.

The record books will now read:

"The last 15-20 games, we just became a great team," Shaquille O'Neal said. "Kobe (Bryant) did a great job keeping everybody involved and everybody just shot the ball well. We played with a hunger."

Shaquille O'Neal strolled down a hallway of the First Union Center in Philadelphia last Friday night carrying his Finals MVP trophy and leaving the scent of Dom Perignon in his wake. "Smell that?" he said. "That's what winning smells like."

He ducked as he entered a makeshift television studio, where his purple-and-gold Los Angeles Lakers jersey hung on a blue curtain next to Philadelphia 76ers star Allen Iverson's. As Shaq deadpanned his way through the interview, Kobe Bryant walked onto the set to await his turn before the camera. With a garish Lakers leather jacket over his uniform and his championship cap askew, Bryant bobbed his head happily as he hummed to himself and cradled the championship trophy, looking like a little boy who had finally gotten the present he'd always wanted. 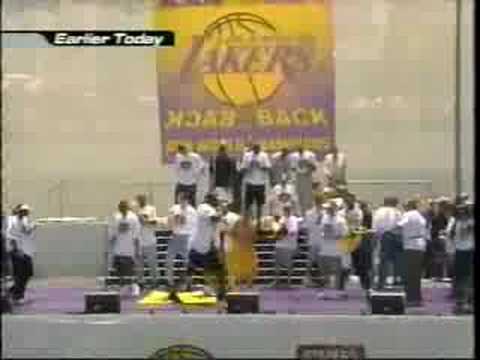