At least 43 persons were killed and more than 230 injured when eight bogies of the Madras-bound Mangalore Mail derailed over a bridge with four of them plunging into the swollen Kadalundi river between Parappanangadi and Calicut on Friday evening, railway sources said.

Eight women and two children were among the dead.

The accident occurred 10km from Calicut when the 19-coach train was passing over bridge number 924 in Palghat division of the Southern Railway at about 1700 IST. It was raining heavily at the time, railway sources in Trivandrum said.

Source: '43 killed as Mangalore-Madras Mail plunges into a river in Kerala'; D. Jose, Rediff on the Net, June 22, 2001 Added by: Colin Harris

Officials in the Indian state of Kerala say 64 bodies have now been recovered from the mangled wreckage of a passenger train that came off the rails on a century-old bridge on Friday.

Most of the dead were in three carriages that plunged off the bridge and into the river below.

Military divers were brought in to try to reach passengers trapped inside these submerged carriages.

The monsoon rains had been very heavy that year, and some believe that this contributed to the problems on the bridge that caused one of the rails to break as the heavy train passed over them. The bridge was 140-years old and in a poor state of repair, and it shifted when the line broke, derailing the train. As it shifted the first four carriages, including the women-only carriage and the engine, fell into the swollen river, two being submerged totally, and two others partially submerged.

Rescue parties, totalling over 500 people from nearby towns, entered the river to rescue people from the wrecked carriages, and support was also received from fire brigades and the Indian Navy, who sent fifty professional divers to attempt to rescue those trapped in the underwater railway cars. Railway officials and family members also arrived rapidly with the aid of a special train.

The death toll for the accident rose steadily as bodies were retrieved from the wreckage over the course of a week, but a figure of 57 people was eventually reported as killed or missing, including at least eight women and two children, whilst between 117 and 300 were injured and transported to nearby hospitals. These figures were still challenged by some, who said the toll was higher and that a number of people were still missing.

The enquiry into what actually caused the damage to the bridge was highly controversial, because government investigators concluded that one of the bridge's pillars had sunk into the river, causing an uneven kink in the track, which snapped when the train hit it. Subsequent private investigations have seriously questioned this theory, pointing out that the bridge is damaged on top of the structure in a way which would not be possible if the pillar was unstable. These investigators claim that there was a fault with the train itself, and that the bridge theory is being used for political reasons. 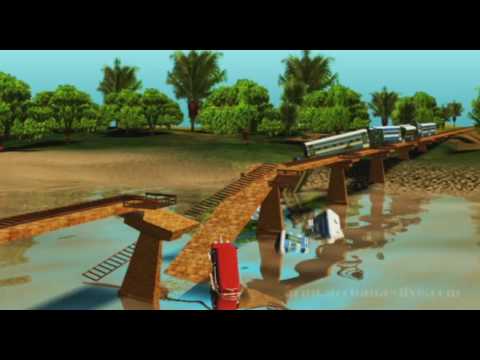