The 2001 Stanley Cup Finals were played in the 108th year of the Stanley Cup, pitting the defending champion New Jersey Devils against the Colorado Avalanche.

New Jersey defeated the Carolina Hurricanes 4–2, the Toronto Maple Leafs 4–3 and the Pittsburgh Penguins 4–1 to advance to the finals. Colorado defeated the Vancouver Canucks 4–0, the Los Angeles Kings 4–3 and the St. Louis Blues 4–1.

The Stanley Cup Finals series featured an ideal scenario: the two top seeds from each conference.

Colorado center Joe Sakic scored his 10th and 11th goal of the playoffs in the first and second periods. The Avalanche smothered the New Jersey defense and scored five goals in the game. The Devils did not score any goals, and in the third period, after the game was 5–0, things culminated in a fistfight between the Avalanche’s Dingman and the Devils’ Odonnell. The third period had a total tally of 44 penalty minutes accumulated by both clubs.

In the first period, goals were scored by Colorado’s Sakic, New Jersey’s Bob Corkum and N.J.’s Turner Stevenson. The 2–1 lead by the Devils held throughout the game as they defeated the Avalanche to even the series at one game apiece. The Devils victory would be important because the team stole home-rink advantage from the Colorado club.

In New Jersey, Devils center Jason Arnott scored an early power-play goal, but in the 10th minute, the Avalanche evened the score when Martin Skoula found the back of the net. Neither team scored any goals in the second period. Early in the third, however, Colorado defenseman Ray Bourque scored a power-play goal to break the tie. Five minutes later, Colorado winger Dan Hinote scored the team’s third goal, and the Devils didn’t respond. The win by Colorado marked another road win in the series, shifting the home-rink advantage back to Colorado.

In the first period, Colorado scored an early goal when Rob Blake shot the puck past Devils goalkeeper Martin Brodeur. Patrik Elias and New Jersey responded when he scored a short-handed goal to even the score at one goal apiece. Later in the second, though, Avalanche center Chris Drury scored to give the Avalanche a one-goal lead going into the third period. But the third period belonged to the Devils: Scott Gomez and Petr Sykora each scored a goal in the third, and Brodeur stopped every puck that went his way. The New Jersey offense overwhelmed the Avalanche defense as they managed 35 shots. Colorado managed only 12 shots. New Jersey again evened the series, this time at two games apiece.

Back in Colorado, Devils forward Patrik Elias started the scoring for the Devils as they jumped out to an early one-goal lead. Precisely seven minutes following that goal, Colorado winger Alex Tanguay tied the game when he scored a power-play goal, but in the late minutes of the first period, New Jersey forward Alexander Mogilny scored the goal that wound up winning the game for the Devils. In the second period, Devils forward Sergei Brylin scored a power-play goal to give the Devils a two-goal lead, and in the third period, center John Madden piled a fourth goal onto the Devils’ scoreboard. The Devils won and reclaimed the home-rink advantage. They forced the Avalanche to try and win on the road to force a seventh game in Denver.

The sixth game parallels the first game for the Colorado Avalanche. The Devils tested the Avalanche early with a barrage of shots on Patrick Roy. After stopping them all, and with two minutes remaining in the first period, Colorado defenseman Adam Foote scored an unassisted goal to give the Avalanche the first point on just their fourth shot. Early in the second period, Avalanche winger Ville Nieminen scored a power-play goal, and late in the second period, Drury scored his 11th goal of the playoffs to give the Avalanche a commanding lead going into the third period. Alex Tanguay scored the only goal of the third period, and the Avalanche won to force a seventh game in Denver for the Stanley Cup. Despite Colorado’s high number of penalty minutes, the Devils were unable to put anything past Colorado goalie Patrick Roy.

Around the eighth minute, the Avalanche started the scoring when Alex Tanguay smacked the puck past Brodeur, and New Jersey trailed going into the second period by a goal. The Colorado club scored two consecutive goals in the second period: another by Tanguay, his sixth of the playoffs, and a power-play goal scored by Sakic, his 13th of the playoffs. Shortly after Sakic’s goal, though, Petr Sykora and the Devils sprang into life when he scored a power-play goal. It left the Devils with only two goals to overcome. Roy and the Avalanche would prove too much for the Devils in the third period as Colorado wins the game and the series.

Colorado Avalanche goalie Patrick Roy received the prestigious, playoff MVP award for the third time in his career. He remains the only player to be awarded the Conn Smythe Trophy three times.

Ray, meet Stanley
Finally! Bourque gets hands on the Cup

DENVER (AP) -- As the seconds ticked away, the magnitude of the moment began to overwhelm Ray Bourque.

He bent over on the ice and tried to compose himself. Nothing could prepare him for a celebration 22 years in the making.

"I couldn't breathe, and it wasn't because I was tired," Bourque said Saturday night after lifting the Stanley Cup following Colorado's 3-1 victory in Game 7 of the finals. "It was just too much. I was trying to hold off the tears."

Bourque, denied in 20 previous playoff appearances, let the tears flow as the clocked finally hit zero, and his teammates mobbed him behind the net.

When Avalanche captain Joe Sakic was presented with the Stanley Cup, he immediately handed it to the 40-year-old defenseman as Bourque's family and 18,000 others tried to hold their own emotions in check.

In Stanley Cup Finals, It All Comes Down to '16W'

The championship round of the Stanley Cup tournament is a genealogy study of the modern N.H.L. The marquee will say New Jersey Devils vs. Colorado Avalanche beginning Saturday night in Denver. Had they been able to play 25 years ago, the billing would have been the Kansas City Scouts vs. the Quebec Nordiques.

Neither of those cities has a big-league franchise anymore, but their descendants represent the best teams in the Eastern and Western Conferences in both the regular season and in the playoffs. Their meeting marks the first time that conference champions of the regular season have met in the finals since 1989, when Calgary, champion of the Clarence Campbell Conference, beat Montreal, champion of the Prince of Wales Conference. (Talk about bloodlines!) At least one Devil sensed that his defending champions again would reach the fourth round this spring.

''You kind of almost expected to be in it,'' said the Devils' captain, Scott Stevens, whose team won the title last spring over Dallas and will seek its third championship in seven seasons. ''No question we were supposed to get back to this point. We had the pressure on us, but we battled through it and we are finally back where we want to be.''

The Avalanche also have a recent history of success. They won the Stanley Cup in 1996, the first season after they moved from Quebec, and they have reached the conference finals in four of the last five years.

Just seeing Ray carry that cup around the ice makes you want to cry. It makes everything in the world seem right again.” 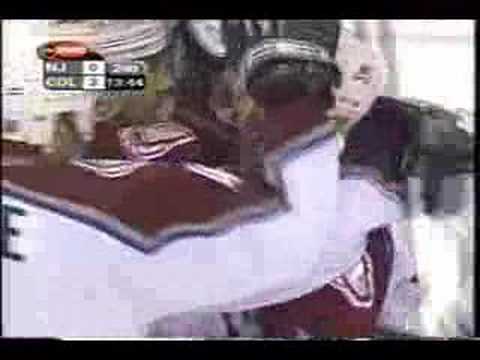