Roger Maris' mark of 61 stood for 37 seasons. When Mark McGwire set his record with 70 in 1998, it was expected the record would endure for at least three decades, probably much longer.

Who knew that it would fall just three years later?

With three games left in the 2001 season, Barry Bonds erased McGwire's mark from the record book. With the bases empty in the first inning, he belted No. 71, a 442-foot shot into the right-centerfield bleachers at Pac Bell Park off Los Angeles Dodgers righthander Chan Ho Park. An elated Bonds trotted around the bases and was mobbed by his teammates at the plate and his 11-year-old son, Nikolai.

Barry Bonds wasted no time, claiming home run history for himself Friday by hitting No. 71 and ending Mark McGwire's reign just one night after he tied baseball's most glamorous record.

The San Francisco star connected on a 1-0 pitch to break the mark that McGwire set in 1998. It came on his first swing since hitting No. 70 in Houston's Enron Field off rookie Wilfredo Rodriguez. Both homers arced high over the field in the same direction. 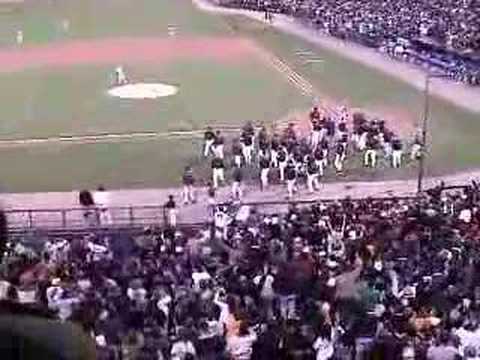