On the 19th, the boat sank during a storm in Indonesian waters about 70 km south of Java. The area was legally international waters but within both Indonesia's EEZ and Indonesia's internationally designated zone of search and rescue responsibility. It also fell inside a temporary Australian border protection surveillance area around the Australian external territory of Christmas Island (which is some 1700 km from mainland Australia). This latter designation was an internal planning and operational tool used by the Australian authorities to deter people smuggling. It had no legal validity and conferred no responsibility in international law, although any Australian ships and aircraft operating there would have acted to save lives if they had known SIEV X was in peril of sinking and its location. At the time, no Australian aerial reconnaissance flights were mounted because of storm weather, the nearest Australian vessel was hundreds of kilometres away, there was confusion about various people smuggler boats, and it was thought this particular SIEV had probably returned to Indonesia

A boat carrying 400 migrants sank in the Java Sea Friday night, and all but 44 of the passengers are believed to have drowned, the International Organization for Migration said here Monday.

Spokesman Jean-Philippe Chauzy said the boat left Java last Thursday morning with 421 people aboard. He said 21 people demanded to be let off and were left on an island.

Later, he said, the captain radioed that the engine had failed and the boat was sinking.

He quoted survivors as saying that the boat went down quickly, and that they were picked up Saturday morning by local fishermen.

A journey to freedom ended tragically when more than 350 people - Iraqi and Afghan asylum seekers - drowned after their overcrowded boat sank off the coast of Sumatra, Indonesia.

Forty-four survivors battled high seas and soaring mid-day heat to cling onto pieces of driftwood for 20 hours before they were rescued Saturday night.

"The conditions were unlike anything you could imagine, worse than anything you've seen in the movie Titanic," said 19-year-old Rami Amjaad who, with his mother, was among the survivors.

The vessel, loaded with at least 400 people, began taking on water within hours of leaving a remote island off the coast of Sumatra Oct. 18 heading for Australia, survivors said. The crew, an Iraqi and two Indonesians, told the passengers, including up to 80 children, that the water pump was working and that there were sufficient life jackets.

The following day and far from shore, the boat foundered, forcing panicked passengers to bail water with cooking pots and plates and heave overboard their worldly possessions in a vain attempt to keep it afloat. At 2:30 p.m. local time, the boat capsized but a group of men rallied to right the stricken, 19-meter-long, three-meter-wide fishing boat. However, within minutes it broke up and sank, spilling dazed survivors and thousands of gallons of fuel into the ocean.

A ship full of asylum seekers bound for Australia sank off the Indonesian island of Java over the weekend, drowning 350 people, mainly from the Middle East, and leaving just 44 survivors. According to Agence France-Presse, the incident is considered to be the worst disaster involving Middle Eastern asylum seekers who use Indonesia as the last step to reach Australia.

According to the International Organization for Migration, most of those on board were Iraqis, but there were also Afghans, Iranians, Palestinians and Algerians aboard. The Associated Press reports that an 8-year-old boy who survived lost 21 of his relatives.

IOM spokesman Jean-Phillipe Chauzy said the 44 survivors were rescued by fishermen Saturday after spending hours in the ocean. Witnesses said the ship sank very quickly after it began to take on water. "According to survivors, the boat sank in 10 minutes," Chauzy said. He added that the IOM has sent a team of doctors and counselors to care for the survivors, who are being held in the Indonesian town of Bogor on the island of Java.

According to the Indonesian navy, the boat left Sumatra Friday, presumably bound for Australia's Christmas Island, carrying hundreds of passengers who had paid between $800 to $1,900 each for the dangerous voyage. 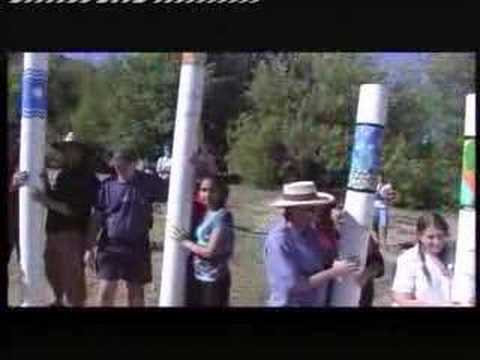