The Nissan Xterra is a compact SUV built on the Nissan F-Alpha truck platform.

Targeted at an adventurous consumer, the Frontier-based vehicle is named after the XTERRA off-road triathlon race series Nissan sponsored through the end of 2006.

The Xterra was introduced in North America in the 2000 model year and marketed as a simple but capable SUV with the slogan Everything you need, nothing you don't. Although accepted by a wide range of ages, incomes, lifestyles and genders, Nissan marketed the Xterra primarily to the adventurous and outdoor consumer. Many commercials feature one driving the vehicle through mud, unloading mountain bikes out of the back, or packing up surfing equipment.

The Xterra wasn't Nissan's first compact SUV. Nissan in Japan had the Nissan Mistral, in Europe the Terrano a 2-door SUV sold from 1993-2006.

Three design cues have remained constant through the vehicle's life, its raised rear roofline and the hump-backed rear gate. The raised roof allows for stadium seating and the hump provides room for a first aid kit. The rear door handles are installed on the "C" pillar as a Nissan design tradition started with the 1986 Nissan Pathfinder. When the four door Pathfinder was introduced, Nissan chose to conceal the door handles as a part of the "C" pillar trim to visually make it appear like a two door truck with a camper shell, with conventional door handles on the front doors.

In the United States, the Xterra was Nissan's entry-level SUV until the arrival of the 2008 Nissan Rogue. In the Nissan lineup, the Xterra is priced between the Rogue and the Murano, but sized below the Rogue.

The Nissan Paladin is a SUV manufactured by Zhengzhou Nissan Automobile Co., Ltd. and is sold in China only. It is active in the Paris Dakar Rally during these years. The Paladin uses the same chassis and running gear as the first generation Nissan Xterra sold in the United States.

The Nissan Xterra SUV is aimed at younger or more active consumers who need a midsize SUV with enhanced off-road capability. Built with stout body-on-frame construction and functional four-wheel drive, the Xterra continues to be a steady seller among those who use their SUV for outdoor recreation as well as those who want to give off that impression.

Compared to its car-based SUV competition, the Nissan Xterra's on-pavement performance is not as comfy or refined, but if serious off-roading is part of your routine then we'd recommend it as one of the better new or used sport-utilities on the market. The Xterra features solid build quality and a reliable nature, which translates into confidence-inspiring peace of mind as you head off into the wilderness of the urban -- or more distant -- jungle.

The current Nissan Xterra is powered by a 4.0-liter 265-horsepower V6 paired with either a five-speed automatic or six-speed manual. There are four trim levels: X, S, SE and Off-Road. The first three are offered in both rear- and four-wheel-drive versions, while the Off-Road is offered in 4WD only. The entry-level X receives basic standard equipment, while the S adds alloy wheels, step rails, a multi-adjustable driver seat and an easy-to-clean cargo area with enhanced tie-down points.. The SE piles on more premium touches, while the Off-Road model isn't quite as luxurious but boasts extra equipment that improves off-road performance.

In reviews, our editors have found that the current Xterra's strengths include its powerful V6 engine and above-average off-road capability. It still doesn't deliver the sharp handling that a crossover SUV would, however. If you never plan on leaving the street, there are certainly better compact or midsize SUVs on the market. But if trail-busting (or looking like the trail-busting type) is your thing, you can't do much better than the Xterra at this price point.

The current-generation Xterra debuted in 2005, marking the first major redesign for the model -- sharing not a single part with its predecessor, yet looking vaguely familiar. The second-generation vehicle's overall length was unchanged, but the wheelbase was stretched by 2 inches. This not only resulted in a sleeker and more integrated look, but also improved ramp angles for increased off-road clearance. Perhaps most importantly, the Xterra then clambered up slopes (or suburban driveways) like a mountain goat on amphetamines, thanks to a powerful 4.0-liter V6 that addressed the power shortage of first-generation models.

Consumers looking for a used current-generation Nissan Xterra can't really go wrong, as there have been no significant mechanical changes, but they should be aware that the X model did not receive basic convenience items like power accessories until 2008. In '09, a slight refresh took place, giving the Xterra a face-lift, adding various exterior and trim enhancements and including side curtain airbags as standard equipment.

The first-generation Xterra was unveiled in 2000 as a rugged and functional compact SUV against competitors comprised mostly of more fragile and less capable car-based vehicles. While it sold well initially, early Nissan Xterras did have a few rough edges: The bare interior was constructed of hard plastic panels, the ride was harsh and the modest four-cylinder and 170-hp V6 engines barely had enough oomph to propel the truck-based SUV around town.

Detail upgrades carried through to 2002, when Nissan attempted to fix these flaws in a midcycle freshening by adding a supercharged V6 to boost performance, modifying front-end styling -- including a hood bulge on blown models -- and refining controls, cabin trim and audio systems to help bring it up to date. The supercharger added useful low-speed power, although it petered out before extra-legal velocities were reached.

To avoid the teething problems in 2000-'01 vehicles, shoppers may want to focus on these revised 2002-'04 models, particularly the supercharged versions, when searching for used first-generation Nissan Xterras.

Plenty of things can go wrong on a family excursion, but with the introduction of the highly reliable Nissan Xterra, it isn't probable to be like them. Over the years, SUV designs have been directed in acquiring comfort and handling like that of a car. But Nissan walk off track, instead it goes back to the roots of Sports utility vehicles. The Xterra is aimed to follow its SUV ancestors which connotes that it is more like a truck! Nissan Xterra comes as a ruggedly handsome vehicle with a perfect combination of style and functionality.

Since being rugged is also being cool, Xterra experienced a vast success ever since it was unveiled by Nissan as a compact sport-utility in the year 2000. This SUV has met and even exceed Nissans expectations. Until now, Nissan Xterra is still cool! Among its cool and handsome features are the basket for wet clothes located in the roof rack and a mountain-bike rack found inside the stowage bay. It is always nice to be conventional and an innovator at the same time.

But it is more interesting and cool to be supercharged! With bigger horsepower from its supercharged engine, you'll be driving it a lot more! This engine will bring a big smile in your face at no time! So if you want a basically rugged and muscular SUV that is cost effective, then Nissan Xterra is worth investing! It is offered at lower cost without compromising its functionality and performance! Xterra Nissan Parts are available in many online stores. 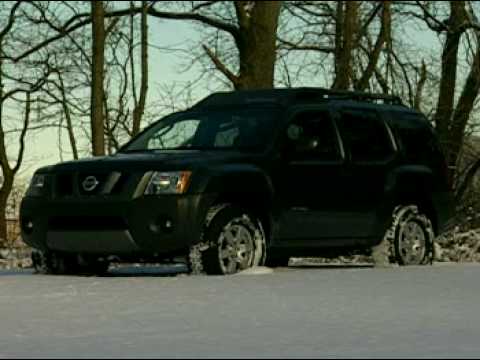 View other events that happened in 2000