On July 14, 2000 at approximately 7:00 PM an F3 tornado tore through the Green Acres Campground at Pine Lake in central Alberta killing 12 people and critically injuring more than 100 others.

Pine Lake is a recreational area approximately 25 km (15 miles) southeast of Red Deer, Alberta and 150 km (95 miles) northeast of the City of Calgary. The tornado formed out of a severe thunderstorm which formed on the eastern slopes of the Canadian Rockies and moved rapidly eastward. It touched down about 5 km (3 miles) west of the campground and was on the ground for approximately 20 km (12 miles).

A tornado occurred at Pine Lake, Alberta (about 25 km southeast of Red Deer, station identifier CYQF), from 00:45 to 01:15 UTC on 15 July 2000 (6:45 to 7:15 PM MDT on 14 July). 12 fatalities and over 100 injuries resulted when the tornado struck the Green Acres lakeside trailer park and campground (producing F3 damage). This storm also produced golfball to baseball size hail.

As night falls on the Green Acres campground at Pine Lake, Alta., on July 14, 2000, so do 300 km/h winds. A terrible funnel cloud carves a kilometre-wide path of destruction, tossing fragile mobile homes into the lake and smashing others beyond recognition. A desperate rescue effort is mounted, but officials have no idea how many visitors were at the campground, or how many were at each site. 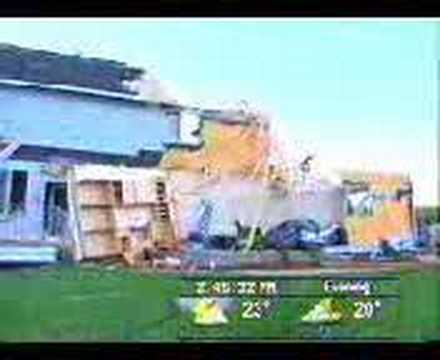