It's a Wrap by Phil Taylor They finally figured it out.

It was there on both their faces, the jubilation and relief that came with knowing that they had cracked the safe and learned how championships are won. There were times in their careers when it must have seemed to Shaquille O'Neal and Kobe Bryant that the trophy that they wanted so badly was locked in a vault, and that no one would tell them the combination. But they persevered, and on Monday night, they received their reward. It took all of the Los Angeles Lakers to win the NBA title with a 116-111 victory over the Indiana Pacers in Game 6 of the Finals at the Staples Center, but they would still be stumbling about as talented underachievers if O'Neal and Bryant had not grasped what they needed to know at last.

When the final buzzer sounded and made them NBA champions for the first time, the two players immediately sought each other for an embrace, and the bitter endings of previous years melted away. There was 1995, when O'Neal's Orlando Magic team was swept in the Finals by the Houston Rockets, as well as his two other postseasons as a Laker that concluded on the short end of a sweep. For Bryant, 21, there was 1997, when he shot wildly down the stretch as L.A. was bounced out of the playoffs by the Utah Jazz.

Wednesday, June 7, at the Staples Center

The Lakers dominated from the start. The Lakers shot 15-20 in the first period while the Pacers shot only 7-20. Reggie Miller would miss all of his shots in the first quarter to give the Lakers a 15 point lead. Austin Croshere came off the bench to keep the Pacers alive in the 2nd quarter, scoring 9 points and grabbing 4 rebounds in the quarter. Although the Pacers attempted a comeback in the 2nd quarter, they were still down by 12. In the 3rd quarter, it would be Mark Jackson who led the Pacers to a comeback, cutting the Lakers lead by 2. Reggie Miller also hit his first field goal in the 3rd quarter, though it would be his last. The Lakers destroyed the Pacers in the final quarter, with a 13-2 run winning by 17 points. Shaquille O'neal scored 43 points and grabbed 19 rebounds.

Friday, June 9, at the Staples Center

Los Angeles and Indiana were evenly matched for the first period, both scoring 28. But Los Angeles suffered a major setback when Kobe Bryant left the game in the 2nd quarter due to a sprained ankle and did not return. Ron Harper went in for Bryant and scored 21 points for the game. Desperate to try to gain the lead, Larry Bird resorted to the "Hack-a-Shaq" strategy. Shaq shot 39 free throws, making only 18, an NBA record for most free throws in a Finals game. Despite this low percentage, Shaq made 9 of 16 in the 4th quarter to keep a Lakers lead. The Pacers cut the lead to 99-96 and were looking to foul Shaq, but when Shaq got the ball he passed to Robert Horry who converted not only the layup, but the foul shot as well giving them a 102-96 lead en route to a 111-104 Laker victory.

Sunday, June 11, at the Conseco Fieldhouse

Due to Kobe Bryant's ankle injury, Indiana was able to get back into the series. Kobe's absence was felt as the Pacers had an 11-2 run in the first period to take an 8-point lead. Austin Croshere once again had another huge 2nd quarter, scoring 8 points as the Pacers scored 61A%.[clarification needed] The Lakers tried to make a run to get back into the game, but once they did Indiana answered with 12 straight points and led by 17. The Lakers were desperate and attempted another run to get within 3 points but Reggie Miller nailed all his free throws at the end of the game to give Indiana a 9-point win.

Wednesday, June 14, at the Conseco Fieldhouse

The Pacers took a quick 9-2 lead due to Rik Smits hitting his first four shots. Kobe Bryant attempted to play with his sore ankle, but only managed to score 6 points in the first half. Even though Bryant and O'Neal were in foul trouble in the first half (each picking up number 3 with 5 minutes remaining in the second quarter), Indiana could not take advantage and did not extend their lead. This would be a problem as Kobe Bryant scored 10 points and the Lakers took a 62-60 lead due to a Glen Rice three-pointer. The game remained close going into the fourth quarter, when O'Neal and Reggie Miller scored 14 and 13 points respectively, sending the game into overtime. Smits and Miller scored all 14 of Indiana's OT points, but it was not enough to overcome as Miller missed a last-second three-pointer to win, and L.A. was able to pull one out in Indianapolis.

Friday, June 16, at the Conseco Fieldhouse

Reggie Miller and the Pacers dominated the game from the start in what would be Larry Bird's last game as a coach in Indiana. Reggie Miller came out and made 5 straight shots including a 4-point play. The Pacers would have a 20 point lead in the 2nd quarter, and eventually won by 33 - it was the worst Lakers NBA Finals loss since the 148-114 loss to Boston in the 1985 NBA Finals, known as the "Memorial Day Massacre."

Monday, June 19, at the Staples Center

The Pacers were looking to force a Game 7 and kept the game close most of the way. Reggie Miller exploded in the third with 10 points, while Jalen Rose shot a turnaround jumper giving the Pacers a 5 point lead going into the final quarter. The Pacers were feeling they could bring this to a Game 7 until Robert Horry scored 8 points and the "Hack-a-Shaq" strategy failed. The Lakers franchise won number 12, while this Lakers team would start their historic threepeat. 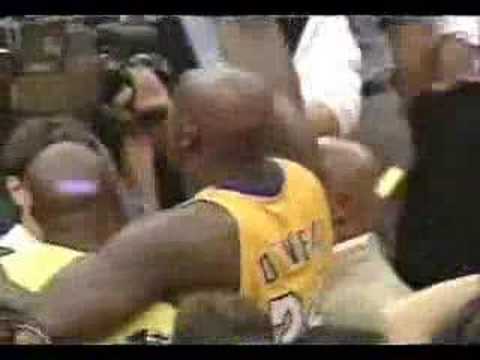 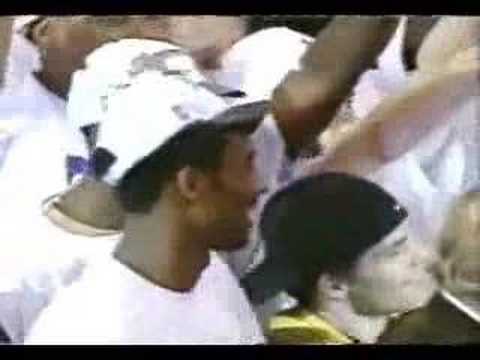 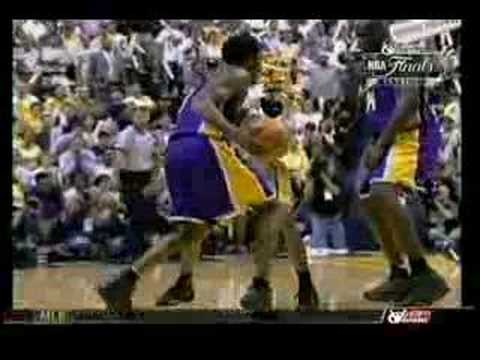