It began on March 16, 2000, and ended with the championship game on April 3 in Indianapolis, Indiana. A total of 63 games were played.

Michigan State, coached by Tom Izzo, won the national title with a 89-76 victory over Florida, coached by Billy Donovan. Mateen Cleaves of Michigan State was named the tournament's Most Outstanding Player. The surprise teams of the tournament were Wisconsin and North Carolina which made the Final Four despite being 8 seeds.

In the first half it appeared that the Cinderella run of the Wisconsin Badgers had a great chance of continuing. Wisconsin's slow down offense, smothering defense tempo held the game to a Michigan State Spartans 19-17 lead. However, the only number one seed left in the tournament opened the second half with a 13-2 run, including 10 points from senior Morris Peterson. After the run, Michigan State coasted home against Wisconsin's limited offense.

Despite being behind 18-3 to start the game and trailing at halftime, the North Carolina Tar Heels took control of the early minutes of the second half, and managed to sneak ahead 48-42 with 15:44 to play. However, the Florida Gators answered back with a 9-0 run to give them the lead for good. The Gators held the Tar Heels to just six points over a 9 1/2 minute span to put them in great shape. Foul trouble ultimately doomed the Tar Heels, and the Gators advanced to their first ever National Championship game.

Michigan State senior Mateen Cleaves limped his way to the Most Outstanding Player (MOP) of the 2000 NCAA Tournament. Cleaves sprained his ankle with 16:18 to play in the 2nd half, and this was after Florida had trimmed Michigan State's double digit halftime lead to 50-44. Cleaves returned about four minutes later, and immediately helped lead the Spartans on a 16-6 run to put the game out of reach. The lone top-seed remaining would bring order to a tournament filled with upsets as they salted away the victory for the school's second ever National Championship (1979). Michigan State coach Tom Izzo earned his first ever title, from his second straight final four appearance. Morris Peterson led the Spartans with 21 points.

INDIANAPOLIS (Ticker) -- While Mateen Cleaves limped, Morris Peterson sprinted toward the finish line. Awaiting Michigan State when it broke the ribbon was the national championship.

The Spartans won the second NCAA title in school history with an 89-76 victory over Florida in front of 43,116 at the RCA Dome.

After watching his point guard and boyhood friend leave the court with an ankle injury nearly four minutes into the second half, Peterson took over and propelled Michigan State to the prize for which it worked three years to attain.

"This is more overwhelming than I thought it would be, if you want the truth," Michigan State coach Tom Izzo said.

Peterson made three 3-pointers and scored 15 points in the final 11:11 as the Spartans, playing before their biggest legend -- Magic Johnson -- captured the crown for the first time since 1979. 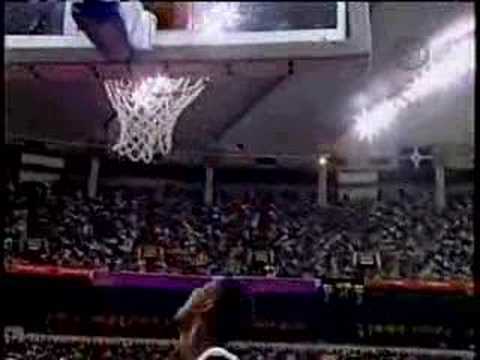