Super Bowl XXXIV featured the National Football Conference (NFC) champion St. Louis Rams and the American Football Conference (AFC) champion Tennessee Titans in an American football game to decide the National Football League (NFL) champion for the 1999 regular season. The Rams (16–3) defeated the Titans (16–4), 23–16, to capture their first Super Bowl win and their first NFL championship since 1951. The game, played on January 30, 2000 at the Georgia Dome in Atlanta, Georgia, was the fourth Super Bowl to be held a week after the conference championship games (the previous time this happened was Super Bowl XXVIII, and like this game was also played on January 30 at the Georgia Dome in Atlanta).

The Rams entered their second Super Bowl in team history after posting an NFC-best 13-3 regular season record, and making their first playoff appearance in 10 years. The Titans also finished the regular season with a 13–3 record, but advanced to their first Super Bowl in team history after entering the playoffs as a wild-card team because they finished in second place in the AFC Central Division.

The first two quarters of Super Bowl XXXIV were largely a defensive battle. Despite outgaining the Titans in total offensive yards in the first half, 294–89, the Rams only held a 9–0 halftime lead off of three field goals. St. Louis later scored their first touchdown midway through the third quarter to go up 16–0. Tennessee then responded by scoring 16 unanswered points to tie the game with 2:12 left in the game, the largest deficit to be erased in a Super Bowl and the first greater than 10 points. However on their ensuing drive, Rams quarterback Kurt Warner completed a 73-yard touchdown pass to wide receiver Isaac Bruce to take the lead again. The Titans then drove to the St. Louis 10-yard line with six seconds remaining, but on the final play of the game, Rams linebacker Mike Jones tackled Tennessee wide receiver Kevin Dyson one-yard short of the goal line to prevent a potential game-tying touchdown. This play later became known as simply "The Tackle."

Warner, who completed 24 out of 45 passes for 414 yards and 2 touchdowns, was named the Most Valuable Player. His 414 passing yards and 45 pass attempts without an interception were both Super Bowl records. Warner became the sixth player to win both the NFL Most Valuable Player Award and the Super Bowl MVP award during the same season. He follows Bart Starr, Terry Bradshaw, Joe Montana, Emmitt Smith and Steve Young.

No question this one was tops

Super Bowl XXXIV was the best one I ever saw. My favorite until now was the 1980 game, when the Steelers came from behind to beat the Los Angeles Rams, the last hurrah for an aging dynasty. My second favorite was 1991, Giants over Bills, tainted by the fact that I couldn't swing the election for Thurman Thomas as the game's MVP, the erroneous theory being that you couldn't choose a player from a losing team. My third favorite, and the most exciting until this one, was 49ers over Bengals in 1989 on Joe Montana's last-minute drive.

Mike Jones tackled Kevin Dyson at the 1-yard line as time expired, preserving the Rams' first-ever Super Bowl title. The Rams drove inside the Titans' 20 with each of their first six possessions, but compiled just 3 field goals and 1 touchdown to take a 16-0 lead. Holder Mike Horan's bobbled snap averted a 35-yard field-goal attempt to conclude the Rams' first drive. 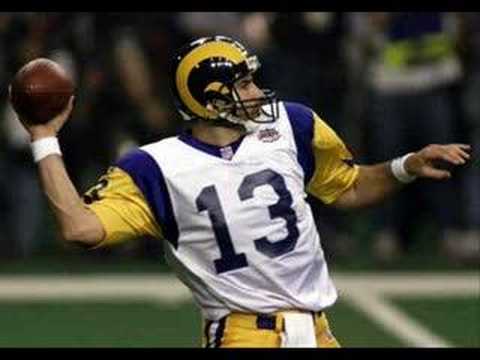