The F-250 to F-550 Super Duties are assembled at the Kentucky Truck Assembly in Louisville, Kentucky. The F-650 and F-750 Super Duties are assembled at the Blue Diamond Truck plant in Mexico.
The Super Duty trucks are larger, heavier built commercial/industrial series pickup trucks with heavier-duty body-on-frame steel ladder frames, axles, springs, brakes, transmissions, more powerful engines, and all other heavier/bigger components (with much higher payload and towing capacities) than the older traditional equivalent F-250, F-250HD (Heavy Duty), and F-350 Ford truck lines. In appearance, the Super Duty line might look a little similar to but does not share any of the design or build characteristics of the F-150. An F-250 Super Duty would surpass the older traditional F-350 in most categories.

For the 1999 model year, Ford dropped the regular (now to be considered the 'light duty') F-250, F-250HD (Heavy Duty), and F-350 truck lines only to introduce all-new F-250 and F-350 Super Duty trucks. By using two separate but related platforms for F-Series trucks, the inevitable compromises inherent in offering a wide range of load-carrying capacities were avoided. The main competition, General Motors, liked the idea so much that for the 2001 model year, the Chevrolet Silverado HD and GMC Sierra HD were introduced.

These trucks were styled distinctly different for the first time from the smaller F-150 half-ton pickups. They did not share components with the F-150 platform at all (excepting V-8 gas engines), even though it was still considered an F-series truck. Instead of the aero look, it was more boldly angular with a raised hood and lowered fenders, somewhat like fender / hood medium truck style pioneered by the 1994 Dodge Ram pickup. As an industry first, 2 big massive complete ring-style front tow hooks were included. The side windows went lower forward in the door like a commercial medium to heavy duty truck (similar to a Kenworth "Daylight Door"), and the grille was also narrower and tall as if from a larger truck, and in 2001, optional manual telescoping Trailer Tow (TT) mirrors became available.

There were three cab options: Standard (2-3 passengers) with two doors, SuperCab (5-6 passengers) with 2 reverse-opening small rear doors (4 doors), and the crew cab with 4 full doors and seats for 4-6 people. The Super and Crew cabs came with 6 ¾-foot and 8-foot (2.4 m) full-size bed options, but the Standard cab was only available with the 8' bed. The F-250 Super Duty would also be the base platform for the short-lived Ford Excursion which was the only passenger SUV larger than the Chevrolet Suburban and its twin, the GMC Yukon XL.
The Ford F-250 and related F-4000 were built in Brazil from 2000 to 2006. Brazilian trucks were widely exported to Australia(F-250), South Africa and Argentina (where they were sold as the F-100).

Sometimes, a regular coffee just won't do it. You need something on the order of a double cappuccino to get the job done -- something with more kick, more muscle. For pickup truck buyers needing a similar boost, there's the Ford F-250 Super Duty.

There are a number of reasons for Ford's popularity in this niche segment. Chief among them is the fact that Ford has typically offered a mind-boggling variety of body styles (regular cab, extended cab, crew cab), powertrain options and trim levels to choose from. This wealth of options allows everyone from small business owners to wealthy ranchers to find an F-250 Super Duty that suits their needs. Another reason that Ford's heavy-duty hauler is a fave is that it can handle massive payloads while also being easy to drive and comfortable to ride in.

Recent improvements have yielded a stronger turbodiesel V8, even better ride and handling dynamics and a redesigned cabin with higher-quality materials. Still, there are a few other choices to consider, as Chevy and Dodge also offer worthy choices in this powerhouse field.

The current Ford F-250 is available in three body styles (regular cab, extended cab, crew cab) and four trim levels (base XL, midlevel XLT, off-road-oriented 4WD-only FX4 and plush Lariat). Many options are available to further customize the F-250, including a fancy King Ranch package and a Tow Command system that integrates the control of the trailer brakes with those on the truck.

In reviews, we've found much to like about the F-250, commenting favorably about its refined ride and handling and high feature content. One downside to this Ford is the base V8's lack of power relative to competing trucks' base V8s.

The Ford F-250 Super Duty was last redesigned for the 2008 model year. Compared to earlier F-250s, it has revised styling, a stronger frame, better handling dynamics, a nicer interior and an improved turbodiesel engine.

The previous-generation Ford F-250 Super Duty ran from 1999-2007. The debut of this version marked the first time that Ford gave its heavy-duty pickups their own style. Compared to the soft contours of the F-150 of the time, the angular Super Duty with its massive grille looked every bit the square-jawed brute that it was under the skin.

Initially, the typical trim levels of base XL, decently-equipped XLT and plush Lariat were offered in standard, extended and crew-cab body styles. Engine choices included the standard 5.4-liter V8 as well as the optional 6.8-liter V10 and 7.3-liter Power Stroke turbodiesel V8. A five-speed manual was standard, with a four-speed automatic optional.

If you're looking for a used Ford F-250 Super Duty, there are a few year-by-year changes to be aware of. In 2001, updates were made that included standard four-wheel ABS for all trims, an available reverse parking sensor, heated seats for the Lariat and more power for the Power Stroke engine. The following year brought a six-speed manual, new seats and the option of power-adjustable pedals.

For 2003, the FX4 off-road package debuted, as did (for crew cabs) an optional power moonroof and the King Ranch edition. A smaller, yet more powerful, 6.0-liter Power Stroke replacing the 7.3-liter version debuted that year as well. (Buyers should be aware, however, that the 6.0-liter diesel engine has a poor reputation for reliability.) For 2005, the big news was a new five-speed automatic transmission, an upgraded front suspension, a new grille and headlight design and increased towing and hauling capacities. The next few years saw just minor changes to feature and package availability.

In our review of this generation Ford F-250 Super Duty, we found it to be a strong performer. Even with a 15,000-pound trailer hitched to the back, acceleration was smooth and linear thanks to the diesel V8. The firm suspension provided a compliant ride along with relatively crisp handling. We also felt that the integrated trailer brake system is a great idea, as it links the trailer brakes to the truck's electronic ABS system for smooth emergency stops.

Although the cabin's fit and finish was unimpressive in our XLT-trim truck, the seats were supportive and the interior was mostly quiet (though under hard acceleration there is a fair amount of powertrain noise) and rattle-free. Overall, this F-250 Super Duty makes for a likable companion on a long haul.

Previous to 1999, the F-250 (it wasn't called the Super Duty yet) was visually virtually indistinguishable from the F-150. However, with available muscle that included a 7.3-liter V8 and the Power Stroke turbodiesel, it was obviously up to much more demanding towing and hauling tasks. 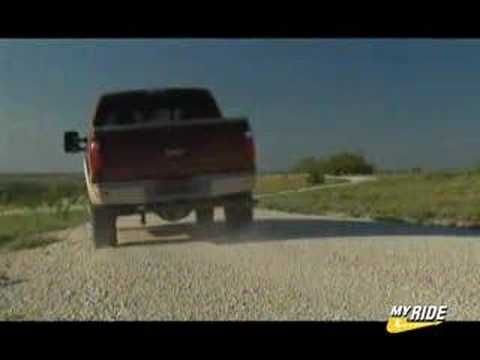