Despite the years of planning, bathrooms had not been taken into consideration and as a result, none were built.

Instead, we were offered portable johns, the closest Port-a-Potty being approximately a 3/4 mile walk from our tents. If the “Peace Wall” hadn’t been where it was, it would have been about 75 feet away from our campsite. But hey, what’s a three quarter mile walk in sweltering heat when you’re about to pass out? Or need to go to the bathroom? Well, to the folks who relieved themselves right behind our tent, leaving a lovely pile of crap and thousands of flies for us to deal with for the next three days, it was obviously too far a walk.

Source: Woodstock '99: What the Hell Happened? Added by: Rob Brent

It should be noted that this being the third time around for Woodstock (the first was in 1969, followed by a 25th anniversary festival in 1994), a lot of the bugs should have been worked out; while several were, many more flaws became apparent. However, don't assume that this was a completely flawed affair — far from it. There were a lot of people (approximately 225,000) there looking to have the fun they came and paid $150 for, and these people made do with all of the reported hardships (long lines for all necessities, EXPENSIVE food and drink, LOADS of garbage, poor sanitary conditions).

The end result of what was supposed to be a good time was inevitable in light of these downsides — and four days of relentless sun, heat, drinking and drugs, no less. If the shameless, blatant capitalism of this festival wasn't so obtrusive, perhaps the degree of rebellion and riot would have been lessened. One can only speculate after the fact.

Crisis intervention workers say they witnessed many more sexual assaults, some taking place in the mosh pit. The Washington Post quotes a rehabilitation counselor from Jessup, Maryland -- who was working as a volunteer at Woodstock -- saying he saw women being pulled into the pit and having their clothes removed and being assaulted and raped by men in the crowd.

"They were pushed in against their will and really raped," David Schneider told the Post. "From my vantage point, it looked like initially there was a struggle, and after that there were other people holding them down. It seemed like most of the crowd around was cheering them on." 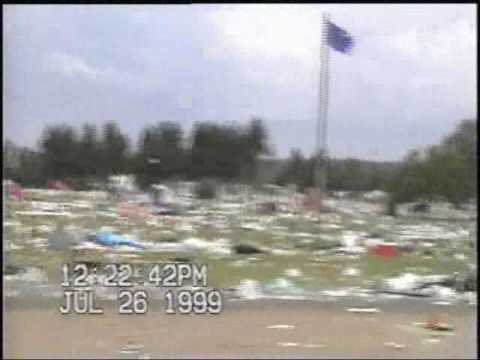