As the season wound down, there was media speculation that Gretzky would retire, but he refused to announce his retirement.

His last NHL game in Canada was on April 15, 1999, a 2–2 tie with the Ottawa Senators, the Rangers' second-to-last game of the season. Following the contest, instead of the usual three stars announcement, Gretzky was named the game's only star. (Gretzky was named all three stars). It was only after this game, after returning to New York that Gretzky announced his retirement, before the Rangers' last game of the season.

Played last game on Canadian ice, a 2-2 tie with the Ottawa Senators. A sold out Corel Centre gave the Great One a standing ovation throughout the overtime period. After the game, the entire Senators team lined up to shake hands with Gretzky, who was named the only star of the game. The crowd, still standing, was thrilled as Gretzky skated out on the ice and waved. A few minutes later, Gretzky returned to the ice for one final skate before the crowd.

During the spring of 1999, rumours abounded that the Great One was about to retire. His last game in Canada was April 15, 1999 in Ottawa. Fans held signs saying "Wayne Please Don't Retire" and "Just One More Year Wayne." After the game, there was not a 'three-star selection'; Gretzky was chosen as the only star of the game. Three days later, he played his final game at Madison Square Gardens in New York. After the game, he held a news conference.

"My gut, my heart is telling me this is the right time. I'm done. I have not wavered at all and I will never play again." 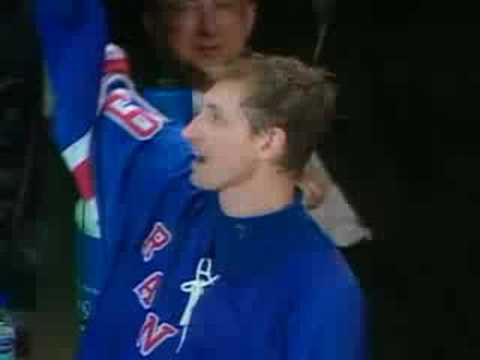