NEW YORK, New York (11 December 1999) - Wisconsin running back Ron Dayne, the NCAA's all-time rushing leader, was selected as the Most Outstanding Football Player of the United States for 1999.

William Dockery, President of the Downtown Athletic Club, which inaugurated and sponsors the Heisman Memorial Trophy Award, announced the selection of Dayne on Saturday evening, December 11th, on a nationally televised ESPN sports special, live from the Club's Heisman Room.

The 5'10'', 254-pound Dayne set or tied 2 NCAA records and 42 school records as he joined Alan Ameche as the second Badger to win the Trophy. He is the 52nd senior and the 38th running back to be selected as the recipient of the award.

Dayne chose to return to Wisconsin for his senior year rather than opt for the NFL draft last January. He helped the Badgers, under coach Barry Alavarez, to a regular season record of 9-2 and a berth in the 2000 Rose Bowl. A win in the Rose Bowl would make the Wisconsin Badgers the first team in the history of the Big Ten to win three Rose Bowl championships in one decade.

Ballots were mailed out to 871 media personnel across the nation plus 51 Heisman winners, for a total of 922 electors. Dayne polled with 944 votes. The point total is reached by a system of three points for a first place vote, two for a second and one for a third.

At 5 feet 10 inches and 252 pounds, Ron Dayne is the second Wisconsin Badger to win the Heisman Trophy. During Ron's four year career at Wisconsin the Badgers complied a 37-13 record and won two Big Ten titles. Ron led the Big Ten in rushing three times during his illustrious career. Ron is the NCAA career rushing leader with 6,397 yards. Ron and the Badgers finished the season with a 17-9 victory over Stanford in the Rose Bowl to go 10-2 on the season. Ron was named the Big Ten Offensive player of the year. Ron was drafted 11th overall by the New York Giants in the 2000 NFL draft.

Ron Dayne (born March 14, 1978 in Berlin Township, New Jersey) is an American football running back who is currently a free agent. He is best known for holding the NCAA record for career rushing yards and winning the Heisman Trophy.

Dayne is usually considered one of the greatest backs in NCAA football history[says who?]. Known as "The Great Dayne" and "The Dayne Train" throughout college, Dayne was the starting running back all four years at Wisconsin. Never a flashy or boisterous player, Dayne was a workman-like back, expected to carry the ball as much as necessary—he had 1,220 carries during his career.
Over his four seasons, Dayne chased the NCAA Division I-A rushing record for total yards in a career. He gained 1,863 yards as a freshman, 1,421 as a sophomore, 1,325 as a junior, and 1,834 as a senior. He finally broke the record in the final game of the 1999 season against Iowa. Dayne ended his career with 6,397 rushing yards (the NCAA did not include bowl game statistics in the total as they do today or his total would be far higher as he started four bowl games and was awarded the game MVP in three of them), eclipsing the record set the previous year by Ricky Williams of Texas. As of 2009, Dayne's 6,397 career yards still stand as the Division I-A career rushing record.[2]
Dayne saved some of his best performances for the four bowl games to which he led Wisconsin. He rushed for 246 to lead the Badgers to a 38-10 victory in the 1996 Copper Bowl against Utah, garnering MVP honors. Dayne only gained 36 yards in the 1998 Outback Bowl loss against Georgia the next season, but bounced back the next two seasons with 246 yards and 200 yards, respectively, in the Badgers' 1999 and 2000 Rose Bowl wins. Dayne won MVP honors in both games, becoming only the third player in the history of the Rose Bowl to repeat as MVP - and the first and still only Big Ten player to do so. Bob Schloredt (Washington/Big Five), Charles White (USC/Pac-10) were the first two, and Vince Young (Texas/Big 12) has subsequently accomplished this feat.
Dayne won the Heisman Trophy in 1999 as well as numerous other awards throughout college, including Big Ten Conference player of the year in 2000 and All-American placement in 1996, 1998 and 1999. His name and number is one of six displayed on the Camp Randall Stadium façade. Dayne's number was officially retired during the Nov. 10, 2007 game against Michigan.
Dayne's career rushing total remains an NCAA record. When yardage from bowl games is included, he amassed 7,125 yards, becoming the first player in NCAA history to total over 7,000 rushing yards. He shares the record for most 200-yard rushing games with Ricky Williams and Marcus Allen, with twelve. He also holds the Big Ten Conference rushing and total touchdowns record, with 71, and is one of five players in NCAA history to rush for over a thousand yards in each of his four seasons.

NEW YORK (CNN/SI) -- On Sept. 25, when he had just committed a costly fumble in a loss to Cincinnati and been shut out in the second half against Michigan, Ron Dayne was on hardly anyone's Heisman ballot.

When the award was handed out 11 weeks later, there was hardly a one he wasn't on.

Dayne, who averaged 203.5 yards over the final four games of 1999 and finished with 1,834 yards and 19 TDs, was awarded the 65th Heisman Trophy as college football's most outstanding player in Saturday's ceremony at New York's Downtown Athletic Club.

Dayne garnered 2,042 points and 586 first-place votes among 922 Heisman ballots. Georgia Tech QB Joe Hamilton was second with 994 points and Virginia Tech freshman QB Michael Vick third with 319. Vick's finish was the highest by a freshman since Georgia's Herschel Walker in 1980.

Wearing a blue pinstriped suit, Dayne was styling at the Downtown Athletic Club, home of the Heisman. When his name was called, he broke into a smile, hugged his coach, Barry Alvarez, and shook hands with the other finalists. 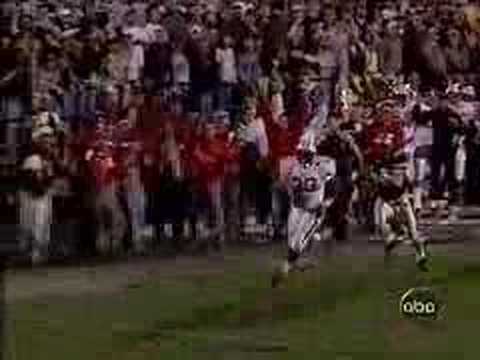 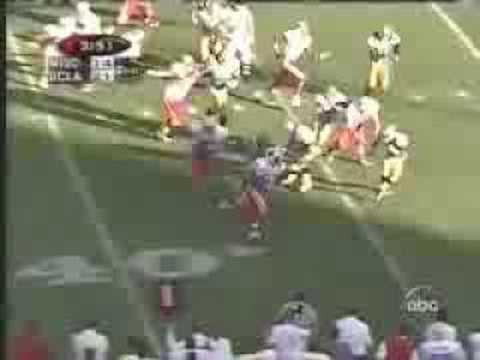