The Fingerpoke of Doom is the common nickname for a storyline in American professional wrestling history that happened on January 4, 1999 on WCW Monday Nitro, the flagship show of World Championship Wrestling.

The show took place at the Georgia Dome in Atlanta. This event is considered by some as one of the pivotal broadcasts that led to the downfall of WCW during the Monday Night Wars.

After this episode, WCW's TV ratings steadily went down, only reaching a 5.0 rating or higher twice (it drew a 5.7 on February 8, 1999 because of a Westminster Dog Show-induced RAW pre-emption on the USA Network). In retrospect, some observers inside and outside the pro wrestling business noted that this storyline turned off numerous fans for several reasons.

When asked about the Fingerpoke incident, Kevin Nash once replied "If Hogan had given Goldberg the Fingerpoke of Doom, it would've killed him!" in reference to Goldberg's propensity to get himself injured doing routine things at that time. Nash has also defended the incident by claiming that any Nash/Hogan matches would have been terrible.

In mid-2005 while feuding with Hogan, Shawn Michaels made a loose refference to the Fingerpoke of Doom, by saying "Hulk Hogan, what'cha gonna do when the Heartbreak Kid Shawn Michaels won't lay down for you?".

In the storyline, WCW Champion Kevin Nash was scheduled to face Goldberg in a rematch for the WCW World Heavyweight Championship. Goldberg had previously been undefeated until Nash, with interference by Scott Hall, beat him for the title at Starrcade eight days before the January 4 Nitro. Supposedly unaware of and unhappy with Hall's interference, Nash came to Nitro the night after Starrcade and told Goldberg he would get a rematch next week. However, Goldberg was (kayfabe) arrested mid-show and accused of "aggravated stalking" by Miss Elizabeth (he was originally going to be accused of rape but refused to go along with that particular storyline). He was later released when Elizabeth could not keep her story straight. Meanwhile Hulk Hogan, who had "retired" two months prior, showed up for the first time since his retirement shortly after Goldberg's arrest. Nash interrupted to say that everyone was promised a title match and offered Hogan the match since Goldberg was not going to be able to wrestle. Hogan accepted despite only having street clothes to wear. Hogan and Nash had huge storyline heat prior to this point; Hogan was the leader of the villainous nWo Hollywood faction (which wore black and white) while Nash helmed the fan favorite nWo Wolfpac faction (which wore black and red). A match between the two leaders of the rival nWo factions proved to be something the fans were interested in, as the segment drew the highest rating in weeks. Come main event time, Hogan came out to the ring accompanied by "Big Poppa Pump" Scott Steiner, ironically with the latter in his wrestling gear. As Nash made his entrance, his former tag team partner Scott Hall entered as well in a Wolfpac T-shirt and reuniting The Outsiders in the process.

The match started with the two men circling each other. Nash tried intimidating Hogan by pushing him hard into the corner. As retaliation, Hogan then poked Nash in the chest, and Nash quickly and dramatically fell to the mat on his back (in the book The Death of WCW, RD Reynolds and Bryan Alvarez compared Nash's fall to "getting hit in the chest with a cannonball").[4][5] Hogan then covered him for a pin and was declared the new WCW World Heavyweight Champion. After this occurred, Hall and Steiner entered the ring and celebrated with Nash and Hogan to reunite the nWo.[6][7] Goldberg then reentered the building, running to the ring to attack the nWo, only to be jumped by Wolfpac member Lex Luger (marking his place in the reunited nWo) and then beaten down by the rest of the group. As the show ended, the nWo handcuffed Goldberg to the ropes, repeatedly shocked him with a taser, and spray-painted the letters "nWo" on his back. While Goldberg, who was now the only major star representing WCW, was being assaulted, the fans started chanting for the wrestler Sting to come to the rescue. Sting had been out of action since Halloween Havoc in late October 1998, after suffering from an (kayfabe) injury at the hands of Bret Hart. For a time, it seemed as if history might be repeating itself with a returning Sting, the historical savior of WCW, taking on a new, revived, and united nWo. However, by the time Sting returned to television in late March, the new NWO storyline had already fizzled out due to member's injuries. 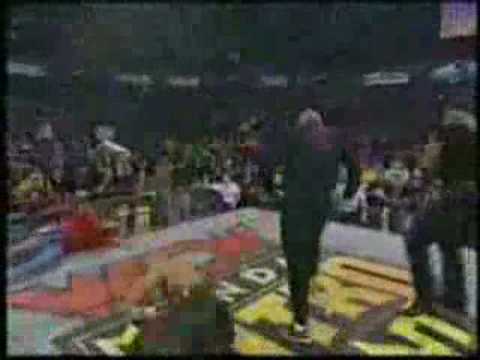 View other events that happened on January 4