The Mercedes-Benz W220 was a series of flagship sedans which constituted the Mercedes-Benz S-Class during the early-to-mid 2000's. The W220 (and similar W215 CL-Class coupés) started production in 2000.

The W220 was a replacement for the earlier W140 S-Class after the 1999 model year. Compared to its predecessor, the W220 had somewhat smaller exterior dimensions but offered more interior space, particularly in the long wheelbase versions (although the boot is smaller than on its W140 predecessor). Production of the W220 totalled 485,000 units, slightly more than the production totals from the W140. Production ended in 2006 when the W220 and W215 were replaced by the W221 S-Class and the W216 CL-Class.
In many European countries, the diesel S320 CDI version became the most popular model, making it the first S-Class in which a diesel engine achieved broad appeal.

Unlike previous iterations of the S-Class, the W220 was not the company's first model to feature the company's new design theme for the next generation of Mercedes-Benz. This honor was given to the A-Class launched in 1997. Nevertheless, being Mercedes flagship vehicle worldwide (while the A-Class was never sold in North America), the S-Class largely popularized the new theme. It demonstrated a significantly different stylistic mindset, with both exterior lines and an interior design that express elegance and modernity. This can be seen as a response to criticism on its W140 predecessor, which was sometimes labeled as too big and too heavy.

Despite being smaller, the new car was roomier inside while the dashboard carried over the new styling details first seen in the Mk I A-Class the year before.
A facelifted version of the S-Class was introduced in 2003, offering a more aerodynamic front-end and redesigned tailights, though the exterior style remained largely analogous to the previous W220 models. Although the facelift only made minor changes to the exterior, it addressed several of the issues in the COMAND system and other interior features. Exterior updates included a more upright grille angle, new transparent housing for the headlamps (replacing the earlier translucent versions), and restyled lower air intakes on the front bumper.

As with each new S-Class, the W220 was technologically advanced at the time of its launch, bringing in new innovations such as Airmatic air suspension, Active Ventilated Seats (which used miniature fans in the seats to move air through perforations), keyless entry and ignition, radar-controlled Distronic distance-aware cruise control, and a cylinder deactivation system called Active Cylinder Control for the S500 and S600 models, which improves fuel consumption and reduces emissions. All were pioneering innovations at the time of the W220's conception. 4Matic all wheel drive was introduced to the North American S-Class for 2003.

In late 1999, the W220 was introduced. The W220 S-Class was completely restyled, with a body that was slightly smaller and lighter than its predecessor. Unlike its predecessor, the W220 was not the first model to feature the company's new design theme for the next generation of Mercedes-Benz. This honor was given to the A-Class when it launched in 1997. The new S-Class incorporated the new styling cues first introduced on the Mk I A-Class the year before (for example, the dashboard carried over the new styling details first seen in the A-Class). Despite being smaller, the W220 S-Class offered more interior space than the W140. Production of the W220 S-Class totaled 485,000 units, slightly more than the production totals from the W140.
As with each new S-Class, the W220 brought in new innovations such as Airmatic air suspension and Active Ventilated Seats (which used miniature fans in the seats to move air through perforations). A navigation system with center console-mounted screen display was introduced, along with the COMAND input control system. Other options included keyless entry and ignition, a radar-controlled Distronic cruise control system and a cylinder shut-off system called Active Cylinder Control. The 4MATIC all wheel drive system was introduced to the North America market S-Class for 2003.
Consumer Reports classified the W220 model's reliability as "poor," its lowest rating, and declared it one of the "least reliable luxury cars."Build quality, however, was generally considered to be good. For instance, Forbes described the W220 S500 as "built remarkably well." Early W220s were recalled for issues with the trunk spring and the hydraulic fuel line; there were no recalls for the 2005 or 2006 model years.
In 2002 Mercedes-Benz introduced the world's first preemptive safety system on the W220 with its first iteration of Pre-Safe.
In 2003, the W220 S-Class received an exterior refresh with updates to the front fascia. The grille angle was adjusted to a slightly more upright position, and the xenon-discharge headlamps were given a new transparent housing, replacing the earlier opaque versions. The front bumper's lower air intakes were also restyled. In 2005, the S-Class was the first vehicle to receive a TÜV Institute environmental certificate from the German Commission on Technical Compliance for environmentally friendly components. 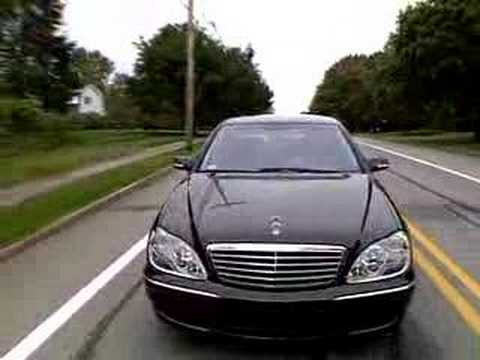