Soulcalibur (ソウルキャリバー, SōruKyaribā) is the second game in the Soul series of fighting games developed and produced by Namco.

Originally released in the arcades running on the Namco System 12 hardware, Soulcalibur was ported to the Sega Dreamcast with improved graphics and new features, where it became one of the best-selling Dreamcast titles overall. The Sega Dreamcast port is often cited as the greatest fighting game of all time, and even one of the greatest games across all genres; it is ranked as the sixth best-rated game in the top-ten best games of all time by review aggregator site Game Rankings.

Following the first game Soul Edge (also a game created for the arcade originally, and subsequently the PlayStation) in 1995, the Soul series received a major makeover and was retitled Soulcalibur in 1999. Hence, Soulcalibur can also refer to the series consisting of Soulcalibur and its subsequent sequels (essentially the Soul series minus Soul Edge).

Soul Calibur (also a common misspelling for the name of the series itself) is the name of the holy sword, created to battle the evil sword Soul Edge, around which the games' storylines revolve. According to a timeline released by Namco on their "Soul Archive" site, Soulcalibur takes place around 1587.

Upon considering what exactly makes me have so much fun with the game, I've come to a couple of reasons that I should probably pass on to you. First off is the level of control you're given over the characters. I think I'll take Seung Mina, my favorite character (also my favorite character from part 1), as an example. This babiliscious Korean babe uses (according to soulcalibur.com) a Zanba-To as her weapon. I've been able to make her do so many different things with her blade, by simply using subtle d-pad motions and a few button presses. Some examples that come to mind include having her spin the weapon like a baton, stick it out in front of here in an apparent effort to knock the footing out from under her opponent, swing it in 180 degree motions from her left to right side, as well as a whole myriad of other things. I suppose this is no different from Virtua Fighter or Tekken, games which promise hundreds of moves from their characters, but it just seems to be so much more obvious, at least to the casual fighter like myself. I have a feeling that most of the people who purchase the game on 9/9/99 will feel the same way. 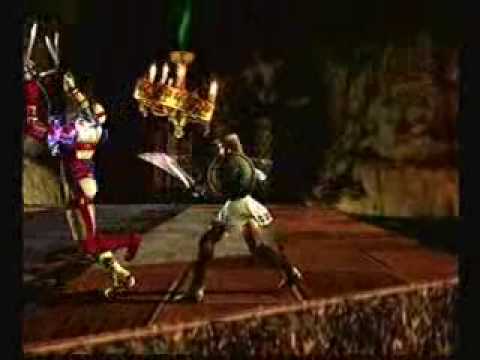 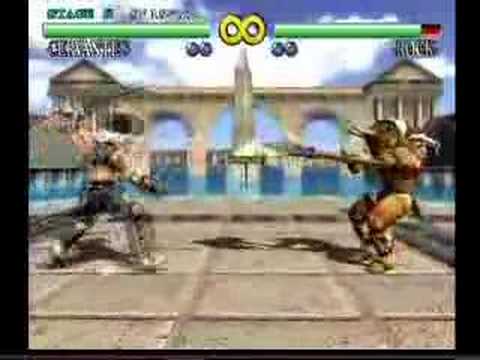