Before the 1998 World Cup, Beckham was still the rising star.

His relationship with Victoria was blossoming and his career at Manchester United was taking shape. Yet post tournament, everyone knew who he was, and not only that, most people hated him. An excellent tournament, in which he scored his first goal for England, imploded in one crazy moment against Argentina. Lying on the floor, Beckham kicked out at Diego Simeone. The referee saw it and showed him a straight red card. At the time, England were level with Argentina and if anything were on top. But Beckham's red card changed the game and eventually England were beaten. Beckham was blamed for England's failure, effigies were burnt and years of abuse followed. The Beckham story had truly begun.

In a second-round World Cup match between England and Argentina, Beckham is ejected after kicking Argentine midfielder Diego Simeone after Simeone fouled him. The English team loses on penalty kicks, and Beckham becomes the nation's whipping boy – he receives death threats and an angry fan mails him two bullets with Beckham's name etched on them. Even British Prime Minister Tony Blair weighs in, saying, according to Sports Illustrated, "He is obviously going to have to learn from this." 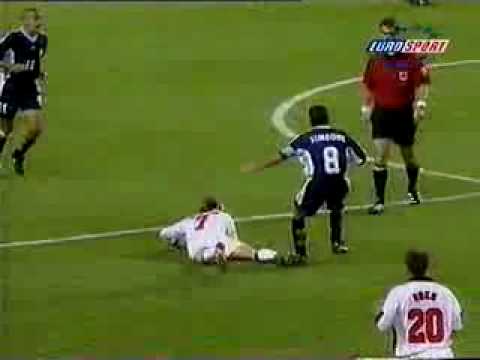