About 6 km before the location of the accident, the tyre broke, but did not cause a derailment yet.

About 200 m before the bridge, the tyre was caught in the flange guide of a switch, which broke off and derailed the first car to the right hand side. 120 m later, the derailed axle hit another switch, which caused the next bogie to go off track. The third car went far enough from the track to destroy a concrete pillar of the bridge, and was separated from the rest of the train. This triggered an emergency brake in both parts of the train. The bridge came down slow enough that the fourth car could pass it without being hit, but was catapulted to the side. The fifth car was cut in half by the bridge, the sixth was buried under the bridge, and the rest of the train crashed right into it.

Shortly after 11.00am 3 June 1998, a German high-speed train, became derailed and struck a road overbridge just outside of the small town of Eschede. The Inter City Express (ICE) was travelling at 200km/h (120mph). The front, power-car passed under the bridge safely, but the following carriages struck the bridge bringing it down on top of them. The remaining carriages then crashed, concertina fashion into the wreckage. The death toll has risen remorselessly as the rescue operation has continued through the night. It is now believed that 120 people died.

The train involved was ICE884 Munich - Hamburg. It had departed at 0547 and was due to arrive at Hamburg-Altona station at 1206. The train consisted of 13 vehicles and could accommodate more than 700 pasengers. Although the exact number being carried is unknown, estimates suggest that more than 400 passengers were in the train.

The Eschede train disaster was the world's deadliest high-speed train accident. It occurred on 3 June 1998, near the village of Eschede in the Celle district of Lower Saxony, Germany. The toll of 101 dead and 88 injured surpassed the 1971 Dahlerau train disaster as the deadliest accident in the history of the Federal Republic of Germany. It was caused by a single fatigue crack in one wheel which, when it finally failed, caused the train to derail at a switch.

At 11:02, the local police declared an emergency; at 11:07, as the magnitude of the disaster quickly became apparent, this was elevated to "major emergency"; and at 12:30 the Celle district government declared a "catastrophic emergency" (civil state of emergency). More than 1000 rescue workers from regional emergency services, fire departments, rescue services, the police and army were dispatched. Some 37 emergency physicians, who happened to be attending a professional conference in nearby Hanover, also provided assistance in the early hours of the rescue effort, as did units of the British Forces Germany.

While the driver and many passengers in the front part of the train survived, there was little chance of survival for those in the rear carriages, which crashed into the concrete bridge pile at a speed of 200 km/h. Including the two railway workers who had been standing under the bridge, 101 people died. ICE 787 had passed under the bridge going in the opposite direction (on the Hamburg to Hanover route) only two minutes earlier.

By 13:45 authorities gave emergency treatment to 87 people. 27 of the most severely injured passengers boarded airlifts for hospitalisation. 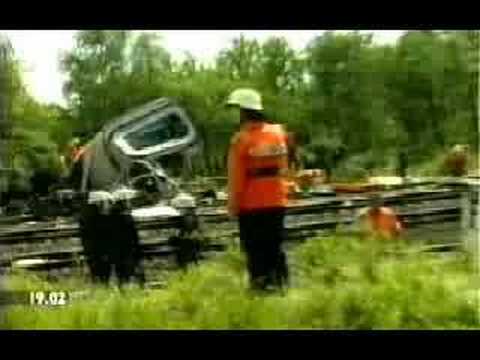