Games 1 and 2 Unlike the 1997 Finals, the Jazz and Bulls entered this series as equals.

The Jazz had won both regular season match-ups with the Bulls, and many analysts predicted a hard-fought seven-game series. Predictions of a Jazz championship were strengthened with their Game 1 victory in overtime in Utah, but they won it in ugly fashion, with Scottie Pippen badly missing a wide open 3-pointer at the buzzer. True to form, the Bulls would tie the series in Game 2 while putting together a huge fourth-quarter run to silence the Delta Center and holding on to win 93-88, finally securing their first victory against Utah all season. Karl Malone shot very poorly in the first two games of the series.

The finals would move to Chicago with control of the series at stake in Game 3. Though anticipation was high, no one could have expected the blow-out of epic proportions seen in Game 3. With a 96-54 triumph over Utah, the Jazz set the record for the lowest points scored in Finals history, as well as the lowest number of points scored in any NBA game (since eclipsed) since the inception of the 24-second shot clock. Also, every player on the Bulls roster scored.

The Jazz would pull themselves together in Game 4 in a better, though vain attempt to tie the series, but lost 86-82. Dennis Rodman, who skipped practice between games to attend a wrestling event, was an unlikely hero, hitting the critical free-throws at the end of game 4, and shutting down Malone throughout the game.

The Jazz' early series-lead seemed like a distant memory, a false indication of a tough series as they entered Game 5 with a 3-1 series deficit. Chicago fans prepared for the last game they would host with the Jordan-led Bulls of the 90's. But any notions of a championship on the home floor would be snuffed out when Michael Jordan missed an off-balance, potential game-winning 3-point shot, preserving the Jazz' narrow 83-81 win. Karl Malone had his best game of the series, scoring 39 points. With the series shifting back to Utah with a far more generous 3-2 Bulls advantage, the promise of another Chicago championship was not so certain.

The Chicago Bulls had never let an NBA Finals series go to a Game Seven in their franchise history, and all but one of their previous five titles (the exception was in 1991) were clinched in the sixth game. Thus, winning Game Six in Salt Lake City was imperative for Chicago.

Yet, as they arrived at the Delta Center for Game 6, things did not look good for the Bulls. Scottie Pippen's back gave way when he dunked the opening basket of the game and he was slowed down, scoring only eight points the entire game. The Bulls were forced to rely almost entirely on Jordan to keep pace with Utah, who scored 23 points in the first half. Emotions ran high at the Delta Center when Jazz discovered problems of their own when they suffered a couple of shot clock violations. TV replays showed that Howard Eisley's three-point attempt was out of his hands before the shot clock hit zero and referee Dick Bavetta missed the call. The Bulls behind Jordan tied the game with a minute left. With 41.9 seconds left, the Bulls suffered a jolt as John Stockton hit a clutch 3-point shot to give Utah an 86-83 lead and send the Delta Center into a frenzy.

After Michael Jordan made a layup to cut the Jazz lead to one, the Bulls needed to stop the Jazz from scoring again. When John Stockton passed the ball to Karl Malone, Michael Jordan stole the ball away and dribbled to the front. Guarding him was Bryon Russell, one of the Jazz's best perimeter defenders. Jordan drove inside the 3-point line, crossed over Russell (perhaps giving the push off), and hit a 20-foot jump shot to give the Bulls an 87-86 lead with 5.2 seconds left. After a time-out, Stockton's three-point attempt hit the rim and bounced away, giving the Bulls their sixth NBA title in 8 years. Jordan, who scored 45 points, and whose game-winning shot has been immortalized around the world, was named the Finals MVP.

Jordan's Jumper Secures Chicago's Sixth Title
The shot looked like so many others during his remarkable career.

The defender loses his footing and falls to the court as he tries to keep the best player in the world from blowing past him. Michael Jordan seizes the moment. He stops on a dime, elevates and lets fly with the shot that will win or lose the game. Nothing but net.

Nothing but an 87-86 victory over the Utah Jazz in Game 6 of the NBA Finals.

Nothing but a sixth title in an eight-year span.

Nothing but another tableau to enhance the legend.

Saving his best for what may not be his last, the magnificent Michael Jordan coolly broke Utah's heart and led the Bulls to another title

Do not hold them to anything they said on this night, not when so many emotions were crashing around inside them, not when they were elated and relieved and giddy and sad all at once. The Chicago Bulls were all misty-eyed, the way champions get, and through that haze the past is always so much clearer than the future. Yes, the Bulls spoke with an air of finality on Sunday night, after they won their sixth NBA title in eight seasons. They talked about packing up their belongings and about the way they wanted to be remembered. Even as the championship celebration was beginning, they seemed to be saying that the party was over. But save your goodbyes. The Bulls as we know them may not be finished yet. 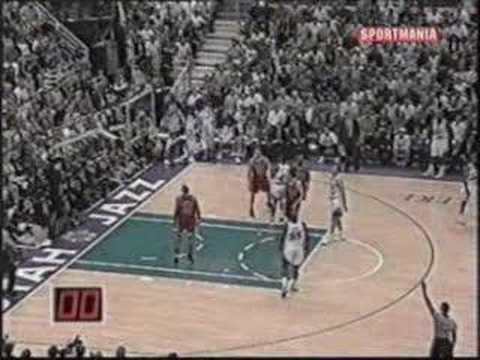