Chagai-I refers to the nuclear tests conducted by Pakistan in 1998.

It was named Chagai-I as the tests were conducted in the Chagai District (Baluchistan province). Plans to conduct a nuclear test started in 1976 with Pakistan Atomic Energy Commission (PAEC) scientists frequently visiting the area to find a suitable location for an underground nuclear test, preferably a mountain. They chose the granite mountain Koh Kambaran in the Ras Koh range in the Chagai Division of Baluchistan in 1978. Its highest point rises to a height of 3,009 metres (sources vary). The then-martial law administrator of the province, Rahimuddin Khan, spearheaded the construction of the potential test sites throughout the 1980s.

The PAEC carried out five underground nuclear tests at the Chagai test site at 3:16 p.m. (PST) on the afternoon of May 28, 1998.The yield of the tests was reported to be 40 kt. Following the tests, the then Prime Minister of Pakistan Nawaz Sharif addressed the nation via Pakistan's government channel PTV and congratulated the entire nation and days of celebration followed throughout Pakistan.

The Directorate of Technical Development of PAEC which carried out the Chagai tests issued the following statement soon after the tests:

“The mission has, on the one hand, boosted the morale of the Pakistani nation by giving it an honorable position in the nuclear world, while on the other hand it validated scientific theory, design and previous results from cold tests. This has more than justified the creation and establishment of DTD more than 20 years back. Through these critical years of nuclear device development, the leadership contribution changed hands from Mr Munir Ahmad Khan to Dr Ishfaq Ahmad and finally to Dr Samar Mubarakmand (Member Technical). These gifted scientists and engineers along with a highly-dedicated team worked logically and economically to design, produce and test an extremely rugged device for the nation which enable the Islamic Republic of Pakistan from strength to strength."

Pakistan's tests were condemned by the international community. Brazil declared that it "deplores" Pakistan's decision to carry out the tests. In an official statement on 28 May 1998, the French Foreign Ministry denounced Pakistan's five nuclear tests. French President Jacques Chirac implored Pakistan to abstain from further testing. Iran also criticized the tests, with a formal statement by Iranian Foreign Ministry spokesman Mahmoud Mohammadi expressing deep concern at Pakistani nuclear proliferation. Robin Cook, Britain's foreign secretary, expressed dismay at the tests. Kofi Annan, the secretary general of the United Nations, deplored the tests saying that "they exacerbate tension in an already difficult relationship. The United Nations Security Council condemned Pakistan's five nuclear tests. "The council strongly deplores the underground nuclear tests conducted by Pakistan despite international calls for restraint," said a statement from Kenya's Njugumu Moses Mahugu, president of the 15-member council. At a news conference 28 May 1998, United States President Bill Clinton condemned Pakistan's nuclear tests saying, "I deplore the decision." He also promised to reprimand Islamabad with the same sanctions the United States has imposed on India." Clinton also signed off on economic sanctions against Pakistan that prohibited billions of dollars in loans from multilateral institutions. 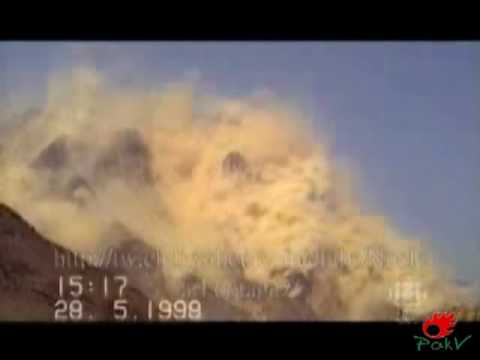