The 1998 Kissimmee tornado outbreak of February 22 - 23 1998, was the deadliest tornado event in Florida history.

Forty-two people were killed and 260 were injured; seven tornadoes were involved in the event. The previous record for the highest tornado death toll in Florida history was 17 on March 31, 1962.

Seven tornadoes rip through central Florida on this day in 1998, killing 42 people. This was the deadliest outbreak of twisters in Florida’s history.

The potential for deadly storms in the winter of 1997-98 in Florida was first forecast in October. The El Nino weather system was in full effect, pushing high-altitude jet stream winds further south than normal--right through the middle of Florida. Meteorologists predicted that this would give rise to a significant possibility of tornado activity in Florida, where such events are usually quite rare. A few twisters hit southern Florida on February 2, but were not deadly. On Friday, February 20, officials saw that an unusually warm system arriving from the southeast was set to collide with the jet stream, which suggested that tornadoes were very likely. The public was alerted.

On Sunday, official tornado warnings were issued for counties across the central portion of the state. However, despite the advance notice, many people went to bed and turned off their radios and televisions, missing the detailed warnings that were issued in the evening. The first tornado struck down at about 10:30 p.m.; six more formed over the next several hours.

During the first killer tornadoes of the year, three supercells dropped killer tornadoes in Florida around midnight on February 22-23, striking while people slept. The final total seems to be forty-two deaths and about 260 injured. President Clinton toured the damage and declared 14 counties eligible for Federal disaster relief. This was Florida's deadliest outbreak to date. Ironically, Florida governor Lawton Chiles had named the week "Hazardous Weather Awareness Week". 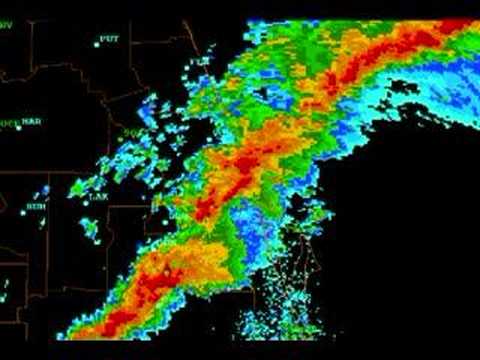