The 6-foot, 225-pound Williams is the second Texas Longhorn to win the Heisman Trophy.

Ricky also garnered numerous post-season honors including the Walter Camp Football Foundation Player of the Year Award, the Doak Walker Award, the Maxwell Award as well as being named the Big 12 Offensive Player of the Year. Ricky holds or shares 20 NCAA records. Ricky became the NCAA career-rushing leader in 1998 with 6,279 yards. Ricky and the Longhorns finished the 1998 season with a 38-11 victory over Mississippi State in the Cotton Bowl to go 9-3 on the season. Ricky was drafted 5th overall by the New Orleans Saints in the 1999 NFL Draft. The selection of Ricky Williams marks the first time in NFL history that one player has been a team's entire draft class.

Ricky Williams became the second player from University of Texas to win the Heisman, joining 1977 winner Earl Campbell. Williams' 1,563-point margin of victory over Kansas State quarterback Michael Bishop was the fourth highest in Heisman history. Williams, who set an NCAA career rushing record, was followed in the voting by five quarterbacks and seven of the top 10 slots went to quarterbacks.

Errick "Ricky" Lynne Williams, Jr. (born May 21, 1977 in San Diego, California) is an American football running back for the Miami Dolphins of the National Football League. He was drafted by the New Orleans Saints fifth overall in the 1999 NFL Draft. He played college football at the University of Texas, where he was a two-time All-American (1997 and 1998) and won the 1998 Heisman Trophy as the best player in college football.

He played college football for the Texas Longhorns. Williams holds or shares 20 NCAA records, and became the NCAA Division I-A career rushing leader in 1998 with 6,279 yards (broken one year later by University of Wisconsin's Ron Dayne). Williams had a sensational senior season, highlighted by rushing for nine touchdowns and 385 yards in the season's first two games; rushing for 318 yards and six touchdowns against Rice; rushing for 350 yards and five touchdowns against Iowa State; and rushing for 150 yards against Nebraska's legendary Black Shirt defense. He helped beat long time rival Oklahoma rushing for 166 rushing yards and two scores.
Williams broke the career rushing record during the annual rivalry game held the day after Thanksgiving (this particular year fell on November 27, 1998) between Texas and Texas A&M. Needing only 63 yards to break Tony Dorsett's 22-year old NCAA Division 1-A all-time rushing record (6,082), Ricky Williams approached the line of scrimmage with 1:45 seconds left in the first quarter having already rushed for 54 yards. At first and ten on the Texas forty yard line, quarterback Major Applewhite handed off to Williams who broke two tackles, sprinted into open field and received a down field block from receiver Wane McGarity for a 60-yard touchdown run and the record. Williams' record-breaking run gave Texas a 10-0 lead in its eventual 26-24 upset of sixth-ranked Texas A&M. He finished the game racking up 295 yards. He broke the NCAA Division I-A career rushing touchdowns and career scoring records in 1998 with 73 and 452 respectively (topped one year later by Miami University's Travis Prentice), and rushed for 200 or more yards in twelve different games (an NCAA record he shares with Dayne and USC's Marcus Allen). Williams won the 64th Heisman Trophy, becoming the second Texas Longhorn to win this honor, joining Earl Campbell. Williams was sometimes known as the "Texas Tornado."

Greatness doesn't always arrive with a flourish. Sometimes it grows quietly, revealing itself gradually PI to even those with the best view. Just last week Texas junior fullback Ricky Brown sat in a team meeting room at Memorial Stadium in Austin and looked to his right at senior tailback Ricky Williams. "I thought, There's a guy sitting next to me every day who's going down in history," recalls Brown. "In a few years I'm going to be telling my kids that I played with this guy, and man, those were some days."

For now, those are some days. College football history is dense with fabled running backs, from George Gipp to Tom Harmon to Doak Walker to O.J. Simpson to Archie Griffin to Tony Dorsett to Earl Campbell to Charles White to Herschel Walker to Bo Jackson to Barry Sanders. To that list it's rime to add the name of Ricky Williams, who is in the midst of a season that ranks with that of any great running back in the college game.

What elevates Williams to this status is not just that he leads the nation in rushing, with 1,724 yards, and needs only 204 yards in his final two games (or three if Texas reaches the Big 12 championship game) to break Dorsett's NCAA Division I-A career rushing record of 6,082. It is not just that he has scored more points (438) and more touchdowns (73) in his career than any college player in history. Or that, barring his abduction by aliens, he has wrapped up the Heisman Trophy. Or that he has been the most dominant player in the country since Labor Day weekend. ("The best, by far," says Oklahoma defensive coordinator Rex Ryan. "You hold your breath when he has the football; you're scared to death") Or that he's as appealing to NFL franchises as a sweet stadium lease. ("The only flaw we've seen is that he can't hit the curve-ball," says Terry Bradway, head of player personnel and scouting for the Kansas City Chiefs, referring to Williams's struggles as a minor league baseball player in the Philadelphia Phillies organization.) 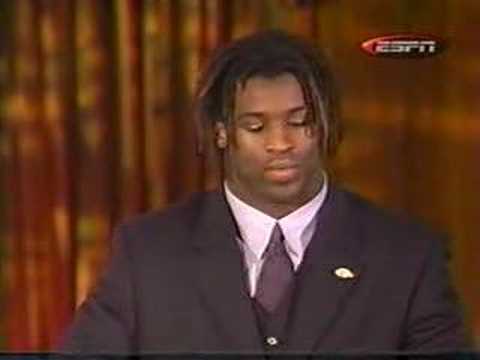 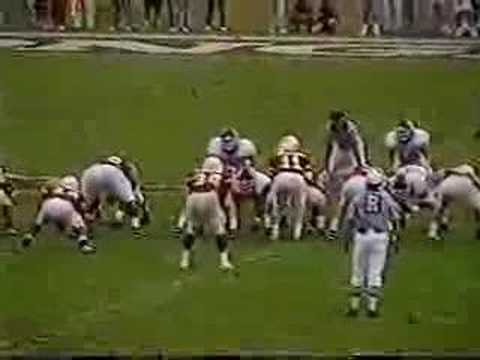