The public funeral of Diana, Princess of Wales started on 6 September 1997 at 9:08 a.m. in London, when the tenor bell sounded to signal the departure of the cortege from Kensington Palace.

The coffin was carried from the palace on a gun carriage, along beside Hyde Park to St. James' Palace, where Diana's body had lain in state for five days before being taken to Kensington Palace. The Union Jack on top of the palace was lowered to half mast. The official ceremony was held at Westminster Abbey in London and finished at the resting place in Althorp.
2,000 people attended the ceremony in Westminster Abbey while the British television audience peaked at 32.78 million, one of the United Kingdom's highest viewing figures ever. 2.5 billion people traced the event worldwide, making it the most watched event ever.

The event was not a state funeral in the strict sense, but a national public funeral that included royal pageantry and Anglican funeral liturgy. A large pile of flowers was installed at the gates of Kensington Palace. Eight members of the Welsh Guards accompanied Diana's body, draped in the royal standard, on the one-hour-forty-seven-minute ride through London streets. At St. James' Palace, Prince Philip, Prince Charles, Prince William and Prince Harry, and Earl Spencer joined to walk behind.
The ceremony at the Westminster Abbey opened at 11:00 BST and lasted one hour and ten minutes. The royal family placed wreaths alongside Diana's coffin in the presence of Princess Michael of Kent, former UK Prime Ministers Margaret Thatcher and Edward Heath, and the grandson of Winston Leonard Spencer Churchill Winston Churchill. The honorable guests included Hillary Clinton, Henry Kissinger, William Crowe, Bernadette Chirac, Queen Noor of Jordan. The Prime Minister Tony Blair had read an excerpt from the First Epistle to the Corinthians: "And now abideth faith, hope, love, these three; but the greatest of these is love". Among other invitees were Juan Carlos I of Spain, Princess Margriet of the Netherlands, Constantine II of Greece, Naruhito, Crown Prince of Japan with Crown Princess Masako and Nelson Mandela.
The Archbishop of Canterbury George Carey and the Dean of Westminster Wesley Carr were also present in the abbey. The Anglican service opened with the traditional singing of "God Save the Queen". The pieces from Johann Sebastian Bach, Antonin Dvorak, Camille Saint-Saens and other composers were played throughout the ceremony. Diana was to have been interred in the hamlet of Great Brington at the Church of St. Mary the Virgin, along with her ancestors, but the Spencer family shifted the place to Althorp for private reasons.
London's Foreign Press Association said it had received more than five hundred requests for credentials to cover the event.

1997: Diana's funeral watched by millions
Britain and the world have said farewell to Diana, Princess of Wales, at the end of an unprecedented week of mourning.
A four mile procession brought her coffin to Westminster Abbey, where politicians and celebrities joined the Royal Family in a subdued congregation.

Over a million people lined the route of the funeral cortege to the abbey and along her final journey to the Spencer family home in Northamptonshire.

The day began at 0908 BST, when the coffin left Kensington Palace on a gun carriage.

Some of the crowd wept, some applauded quietly, but most watched in silence.

On top of the coffin was a poignant reminder that this woman loved by millions was also a mother - a card to "Mummy" from one of her sons.

The two princes, William and Harry, joined their father, grandfather and the princess's brother walking behind the coffin.


She was the very essence of compassion

Other members of the Royal Family watched the funeral cortege pass from the gates of Buckingham Palace.

The union jack on top of the palace was lowered to half mast for the first time ever.

Both Diana's sisters read tributes to her at the funeral service and Elton John played his re-worked version of Candle in the Wind.

Her brother, Lord Spencer, made a funeral address in which he described as Diana the "very essence of compassion, of duty, of style, of beauty".

He used the speech to blame the media for her death, calling her the "most hunted person of the modern age".

The grieving earl also pledged to protect William and Harry and prevent them suffering a similar fate.

The sometimes controversial oration was greeted with spontaneous applause.

A very public day of mourning ended with a private ceremony when Diana was finally buried on an island in the heart of her family estate at Althorp.

The funeral of Diana, Princess of Wales, on September 6, 1997, attracted worldwide attention. On the four-mile journey from Kensington Palace to Westminster Abbey, Diana's casket, itself rather simple, was followed by her sons, her brother, her ex-husband Prince Charles, her ex-father-in-law Prince Philip, and five representatives from each of 110 charities Diana had supported.

The service was attended by celebrities and political figures. Diana's two sisters spoke at the service, and her brother, Lord Spencer, delivered an address that praised Diana and blamed the media for her death.

Elton John -- whom Diana had comforted at Gianni Versace's funeral less than six weeks earlier -- adapted his song about Marilyn Monroe's death, "Candle in the Wind," retitling it "Goodbye, England's Rose." Within two months, the new version had become the best-selling song of all time, with proceeds going to some of Diana's favorite charitable causes.

In one odd irony, Mother Teresa -- whose work Diana admired and whom Diana had met several times -- died on September 6, and the news of that death was nearly pushed out of the news by the coverage of Diana's funeral.

Diana, Princess of Wales, was laid to rest at Althorp, the Spencer estate, on an island in a lake. The burial ceremony was private. 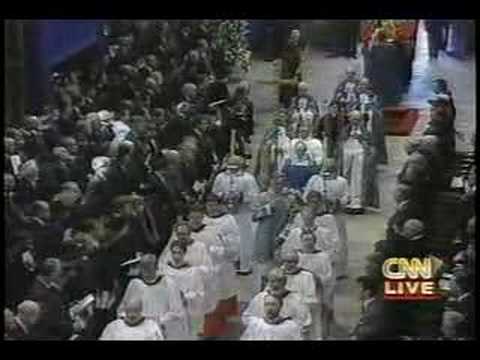