At least 59 people, including 16 children, are feared killed and over 200 injured in a major fire at the multi-storeyed Uphaar cinema hall, Green Park, here this evening.

Most of the deaths have been attributed to stampede and smoke leading to choking and asphyxiation.

Around 5.00 p.m. at least 1,337 people inside the hall were caught unawares when there was a short circuit in a transformer in the cinema hall's basement leading to the fire.

The transformer went off leading to a total blackout inside the hall and a stampede followed, officials said. Several people in the balcony panicked and went to the terrace which led to a rise in the casualties.

This is really in my view not only a civic issue but also a civilisational issue. We commit a large number of crimes by omission. This is an omission. Can we find any other (place) which is disorderly, disorganised, chaotic, without any regard for rules and regulations? It shows that we are a dehumanised civilisation. We are a civilisation with a closed mind.”

— Mr. Jagmohan, regarding the fire incident in Uphaar Cinema in New Delhi

The final verdict came four years later on November 20, 2007, and the quantum of sentences were given out on November 23, 2007, in which 12 people, including the two Ansal brothers, were found guilty, and later convicted for of various charges including, causing death by negligent act, and were given the maximum punishment of two years’ rigorous imprisonment. They were also fined Rs.1,000 each for violating Section 14 of the Cinematography Act. The court also directed the CBI to investigate the role of other officials who had been giving temporary licences to the Uphaar cinema hall for 17 years.

The other seven accused, three former Uphaar cinema managers, cinema's gatekeeper and three DVB officials, were all given seven years' rigorous imprisonment, under Section 304-A (culpable homicide not amounting to murder) of the Indian Penal Code (IPC), and housed at the Tihar Jail. The court also fined all the 12 accused with Rs.5,000 each, and also sentenced all of them to two years’ rigorous imprisonment, as they were found guilty of endangering personal safety of others, both the sentences however were to run concurrently. 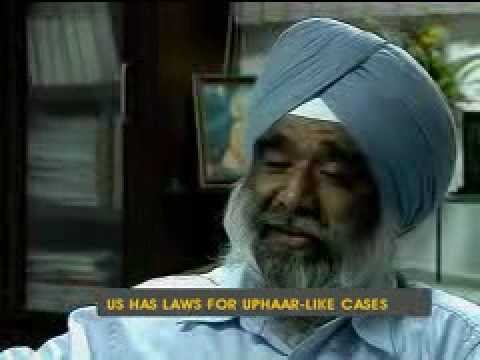