The Packers dominated the Patriots on both sides of the ball, outgaining New England 323 yards to 257 and intercepting quarterback Drew Bledsoe four times.

Green Bay forced New England to punt on the opening possession of the game and started their first drive with great field position after receiver Desmond Howard returned the ball 32 yards to the Packers 46-yard line. Green Bay then opened up the scoring with Brett Favre's 54-yard touchdown pass to Andre Rison on their second offensive play of the game. Then on the Patriots' ensuing drive, Packers defensive back Doug Evans intercepted a pass from Bledsoe at the New England 28-yard line. On the first play after the turnover, New England lineman Ferric Collons sacked Favre for a 10-yard loss, but running back Dorsey Levens rushed for 4 yards and caught a pass for 14 over the next two plays, setting up Chris Jacke's 37-yard field goal to make the score 10–0.

New England stormed back, scoring touchdowns on each of their next 2 possessions. On the second play of the Patriots ensuing drive, Bledsoe completed a 32-yard screen pass to fullback Keith Byars and followed it up with a "dump-off" pass to running back Curtis Martin, who caught the ball near the line of scrimmage and ran 20 yards to the Packers 27-yard line before being tackled. Bledsoe then threw three straight incompletions, but on the third one, Packers defensive back Craig Newsome was called for a 26-yard pass interference penalty, giving New England a first down at the 1-yard line. On the next play, Bledsoe completed a 1-yard touchdown pass to Byars to cut his team's deficit to 10–7.

New England's defense then forced the Packers to punt from their own 17-yard line after a three-and-out, giving the Patriots the ball back after running back Dave Meggett received Craig Hentrich's 39-yard punt at the New England 43-yard line. After a 7-yard reception and a 2-yard run by Martin on their first 2 plays, Bledsoe completed a 44-yard pass to wide receiver Terry Glenn to advance to the Green Bay 4-yard line. From there, tight end Ben Coates's 4-yard touchdown reception gave New England a 14–10 lead. The Packers and Patriots combined for a total of 24 points, the most ever scored in the first quarter of a Super Bowl.

New England's lead was short lived. After both teams exchanged punts, Favre threw a Super Bowl record 81-yard touchdown pass to receiver Antonio Freeman, putting the Packers back in the lead, 17-14. A third down, 9-yard sack by safety LeRoy Butler forced the Patriots to punt on their ensuing drive, and Howard returned Tom Tupa's punt 34 yards to the New England 47-yard line. The Packers then drove to the 14-yard line to score on Jacke's 31-yard field goal to increase their lead, 20–14.

Meggett returned the ensuing kickoff 21 yards to the Patriots 25-yard line. On the first play of the drive, Bledsoe completed a 19-yard pass to Coates to advance to their own 44-yard line. But two plays later, Packers defensive back Mike Prior intercepted a long pass that was intended for wide receiver Shawn Jefferson, and returned it 8 yards to the Green Bay 26-yard line. After the turnover, the Packers went on a 9-play, 74-yard drive that took 5:59 minutes off the clock and scored on Favre's 2-yard touchdown run to give Green Bay a 27–14 lead with just 1:11 left in the half.

After a 24-yard kickoff return by Meggett, Bledsoe completed an 18-yard pass to Coates, and followed it up with a 10-yard pass to Glenn. Then after a 1-yard run by Meggett on the next play, Bledsoe completed a 7-yard pass to receiver Vincent Brisby to bring up 3rd down and 2 yards to go from the Packers 42-yard line. But Green Bay's defense forced 2 pass incompletions from Bledsoe, causing the Patriots to turn the ball over on downs with just 19 seconds left before halftime. The Packers tried to get into scoring range by calling a pass on the next play, but linebacker Willie McGinest sacked Favre, and the score remained 27–14 at halftime.

Howard returned the second half kickoff 23 yards to the Green Bay 25-yard line. From there, Favre led the Packers all the way to the New England 37, but the Patriots made a key defensive stand, stopping Green Bay running back Dorsey Levens for no gain on third down and one, and then tackling him again for a 7-yard loss on a fourth down conversion attempt. Then after driving to the Packers 41-yard line, New England was forced to punt, but they managed to pin Green Bay deep in their own territory when Howard made a fair catch of Tupa's 29-yard punt at the 12-yard line. On the ensuing drive, a 7-yard sack by Patriots cornerback Otis Smith helped the New England defense force the Packers to punt, and the Patriots got the ball back with great field position after Meggett returned Craig Hentrich's 48-yard punt 6 yards to the New England own 47-yard line.

Taking advantage of their excellent starting field position, New England drove 53 yards in 7 plays and scored on an 18-yard touchdown run by Martin to cut the Packers' lead 27–21. But on the ensuing kickoff, Howard returned the ball 99 yards for a touchdown -- the second longest play in Super Bowl history. Favre then completed a pass to tight end Mark Chmura for the successful two-point conversion, giving the Packers a 35–21 lead.

The score proved to be the last one of the contest as the defenses of both teams took over for the rest of the game. The Patriots limited the Packers to 3 punts and a missed 47-yard field goal attempt by Jacke. Green Bay did even better, not allowing New England to advance past their own 32 yard line. Furthermore, White sacked Bledsoe on back-to-back plays on the Patriots first drive after Howard's game-clinching touchdown return. White then recorded a third sack late in the fourth quarter. Bledsoe was also intercepted twice in the final period (one by Newsome and the other one by linebacker Brian Williams).

After the game, Favre reflected on his long road to becoming a Super Bowl champion, which included the death of his friend Mark Harvy in a car accident during the season. "Through everything I really believed I'd be here today. Right here in this stairwell, talking about being world champions. My best friend's gone forever. Trouble never seems to be far away, and the future won't be all rosy, but they can't take this away from me. Thirty years from now, the kids will be getting ready for Super Bowl LXI, and NFL Films will drag out Steve Sabol -- he'll be around 102 then -- and he'll talk about how Brett Favre fought through such adversity. And there will be other players and coaches. But I know this: We etched our place in history today."[3]

Freeman was the top receiver of the game, finishing with 105 receiving yards and a touchdown on only 3 receptions. Dorsey Levens was the game's leading rusher with 61 rushing yards, and caught 3 passes for 23 yards. Favre completed 14 out of 27 passes for 246 yards and 2 touchdowns, and had 12 rushing yards and another touchdown on 4 carries. Favre became the first Super Bowl winning quarterback to have at least three touchdowns (Favre had 2 throwing, 1 rushing) and not be named Super Bowl MVP.

Bledsoe finished the game with 11 more pass completions (25) then Favre, but only 7 more total passing yards (253). His four interceptions tied a Super Bowl record. Martin was limited to just 41 rushing yards and 1 touchdown on 11 carries, but he also caught 3 passes for 28 yards. Meggett recorded 155 combined net yards (117 kick return, 30 punt return, 8 receiving). Coates was the Patriots leading receiver with 6 catches for 67 yards and a touchdown.

Desmond Howard returned a kickoff 99 yards for a touchdown and Brett Favre passed for two touchdowns and ran for a score as the Packers won their first Super Bowl in twenty-nine years.

After suffering through a week of Patriots blather, the Packers got on with the business of winning their first NFL title in 29 years

In the heat of a moment that will forever define Super Bowl XXXI, Desmond Howard couldn’t escape the chill of wounded pride. Even as Howard, the Green Bay Packers’ nonpareil return man, raced down the Louisiana Superdome field on Sunday with the New England Patriots’ kickoff-coverage team in his wake, he carried a Tuna-sized chip on his shoulder. With an estimated 800 million people worldwide watching him seize the day, Howard thought only of one man—Patriots coach Bill (Tuna) Parcells—and said to himself, I can’t believe he’s rolling the dice and kicking me the ball. After the game Howard said, “I knew that sooner or later I was going to scorch ’em.”

As he reached the midpoint of his Super Bowl-record 99-yard kickoff return, Howard ran right past Parcells, who at that juncture probably had as good a chance of tackling him as anyone. But as Howard raced for the touchdown that turned a tense game into an emphatic Green Bay triumph, Parcells could only stand helplessly on the sideline and watch. 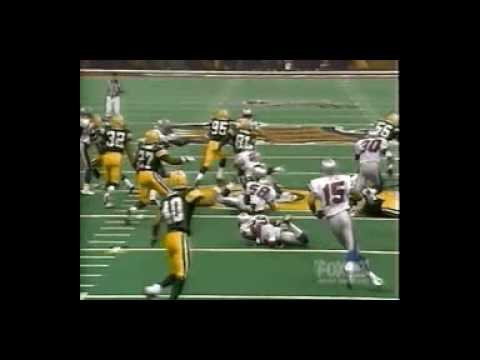