The Ford Ka is a city car from the Ford Motor Company marketed in Europe and elsewhere.

The name is officially pronounced as Ka (/ˈkɑː/, that is, like "car" in non-rhotic dialects of English) as can be heard in Ford's advertising. The current European version is produced in Tychy, Poland, while the one sold in Latin America is built in Brazil and Argentina. It has been produced since 1996 and entered its second generation in 2008.

The car was introduced on September 11, 1996 as a small and low-cost addition to the Ford range. it was based on the Mark III Ford Fiesta platform, but with a radically different external design.
Because the Mark IV Fiesta, launched a year earlier, featured a separate front sub-frame and larger suspension components, its platform was not suitable for a smaller vehicle. Ka therefore used the Mark III Fiesta platform, shortened to give reduced front and rear overhangs. The vehicle was manufactured on the existing Fiesta production line in Almussafes, Valencia, thus minimising new model investment costs for Ford. The Chief Program Engineer was Kevin O’Neill.
When the Ka was first introduced to the public it provoked mixed reactions due to its original and striking New Edge design, overseen by Jack Telnack and executed by Claude Lobo.
Besides the fresh styling, the Ka, like its sister cars Fiesta and Puma, was lauded in the motoring press for its nimble handling. Under Richard Parry-Jones's supervision, the suspension and steering settings allowed for spirited cornering and high levels of grip making it one of the best handling small cars.
At launch, Ka was produced as a single model, with a number of production options including air conditioning, power steering, height-adjustable driver’s seat, adjustable position rear seat with head restraints, passenger airbag, central locking and power windows. An anti-lock braking system option was added in January 1997.
The main drawback was the Ka's 1300 cc OHV four-cylinder Endura-E engine, a design dating back to the 1960s Kent engine used in the Ford Anglia. Although not very modern, it provided enough torque to allow relaxed if not spirited driving. In 2002, the Endura-E was replaced by the overhead cam Duratec engine, with claims of improved fuel efficiency and increased refinement, mostly caused by taller gearing on the non-air conditioned models.
All models had black plastic bumpers to minimise parking damage to paintwork in city conditions. They contained a stabiliser to prevent UV degradation and this made them unsuitable for painting because the paint would not adhere properly. However, it became clear that many owners wanted body-coloured bumpers so they were introduced in 1999 using different bumper mouldings (without the stabiliser) which can be identified by a light styling line over the rear bumper.
The Ka has proved highly profitable for Ford despite its low selling price, largely due to its low development costs.

Ka in the United Kingdom
Ka has been the best selling car in its class in the United Kingdom for a number of years and commands around a fifth of the city car market. The United Kingdom model range originally consisted of the base version, the Ka, and the higher specification Ka² which standardised a number of the options listed above. The Ka² badge was fitted by dealers. Ka³ was introduced later. Power steering was added to the specification of the basic Ka after the first year.
Concurrent with the introduction of body-coloured bumpers Ka² and Ka³ were replaced by Ka Collection and the LuxuryKa (later Ka Luxury).
The Luxury version came with a Quickclear heated windscreen, leather seats and interior trim as well as standard air conditioning. A 'Ka Blue' special edition was also launched in the UK with dark blue bumpers and a silvery-blue dashboard insert, rather than the standard models' silver. The Ka Sun Collection with a full-length fabric folding roof was also added to the range during the summer months.
A further line-up revision gave Ka the following trim levels in the United Kingdom: Studio, Style, Style Climate and Zetec Climate. SportKa was also added to the range (see below). With the car's impending replacement, in May 2008 a Finale special edition with distinguishing features was made available.

Drivers
With power steering standard across all Ford Ka models, the basic 1.3 8v engine is near perfect for darting around the inner city. Front visibility is good, but rear parking tricky due to the small rear window. It takes some getting used to and you can often find objects are further away than they seem. Handling is good and the car has a surprisingly low centre of gravity for its dome shaped exterior. In the cabin the controls are logically presented, but seat height adjustment is not standard in the basic model. And, ABS is not available on any model, for any price. The engines feel a little weak at times.

Passengers
The ride can be quite harsh at times, although there is plenty of space for a super-mini. Headroom is grand with its dome shape. Getting in and out of the ford Ka 3-door rear is relatively hassling free and quite roomy for two in the back. It feels solid and rides bigger than a super-mini, with engine noise subtle.

Practicality
A very practical and economical car with low emissions. The Ford Ka is great to drive around the city and relatively easy to park (see above). Boot space is only average and rear light clusters are obtrusive to boot access, but split rear seats extend its capacity.

Equipment
You don't get much in the basic Ford Ka models, though electric windows, central locking, seat height adjustment and metallic paint is standard in the Ka Collection. If you're really feeling flush, the Ka Luxury version comes with leather seats and air-conditioning.

Safety & Security
An airbag comes, as standard for the driver, but passenger and lateral air bags are extra at £300 together. The Ford Ka performed ok on Euro NCAP tests (3/5), with good side-impact protection but lower than average front impact protection. The Ka only scored a 1/5 for pedestrian test rating. There is an engine immobiliser, but the car is easy to break in to, with the boot a no contest.

Quality & Reliability
Fords quality is evident throughout the Ka, although the stylish interior in prone to being out-dated soon. There have been a few electrical niggles, but the Ka is a long way into its production run that these have been sorted now.

Owning
Not the most glamorous of vehicles and the un-colour coded bumpers look a little cheap, but the Ford Ka does have unique styling. It's fun to drive, relatively economical, cheap to run and easy to park once you get used to it. Re-sale values are better than average for a Ford vehicle and the car is classed in insurance group 1 or 2.

The Ford Ka may not be the newest small car on the market but it still has plenty to offer. Cheap to buy and run, it's once unusual styling has stood the test of time well and it's great fun to drive - especially the peppy SportKa version. It's fairly spacious too given it's small dimensions but the cabin is starting to look dated, especially with large amounts of exposed metal on show. The 1.3-litre engine in the standard Ka is fine around town but noisy at higher speeds and the Ford lacks the refinement of newer small hatchbacks. 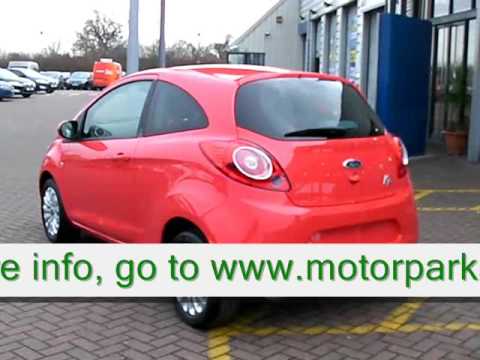