Mario Kart 64 (マリオカート64, Mario Kāto Rokujūyon) is a racing game developed and published by Nintendo for the Nintendo 64.

Mario Kart 64 is the sequel to Super Mario Kart for the Super Nintendo Entertainment System. Changes from the original include the move to 3D computer graphics and the inclusion of four player support. Players take control of characters from the Mario universe, who race around a variety of tracks with items that can either harm an opponent or aid the user. The move to three dimensional graphics allowed for track features not possible with the original game's Mode 7 graphics, such as changes in elevation, bridges, walls and pits. However, the characters and items remained 2D pre-rendered sprites.

Music for the game was composed by Kenta Nagata. The introduction music for Mario Kart 64, which is loosely based on the original Super Mario Kart theme tune, was remixed and used in the music video game Dance Dance Revolution: Mario Mix for the Nintendo GameCube. The game was one of the best sellers and had sold millions of copies. 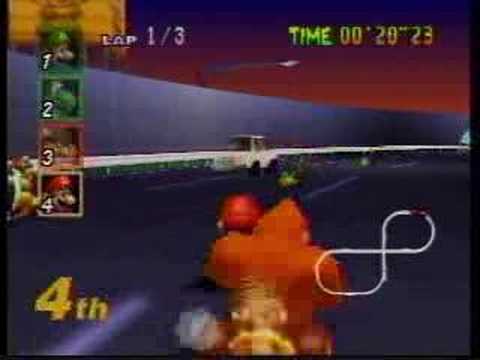