1996 World Series The 1996 season witnessed what would eventually become the fourth installment of the New York Yankees dynasty.

To date, the Bronx Bombers had already dominated three separate decades en route to thirty-three Fall Classics and twenty-two World Championship titles. This year's Yankees dominated the American League throughout the entire regular season on the arms of one of baseball's top pitching staffs that featured Andy Pettitte, David Cone and the league's best closer in John Wetteland. New York's newest skipper Joe Torre had also risen to a "folk-hero-like" status after returning the franchise to the Fall Classic after succeeding Buck Showalter who had repeatedly fell short. A true "hometown hero", Torre had grown up in the Flatbush section of Brooklyn and made his name as an All-Star catcher and infielder for both the St. Louis Cardinals and Atlanta Braves. Both his experience and demeanor made him a natural for managing, and he was a good one, for the Mets, Braves and Cardinals. After being fired three times, Yankees owner George Steinbrenner offered him the job despite critical response from his colleagues. The daring decision would prove as one of Steinbrenner's best as Torre would later go on to become one of the most successful managers in baseball history.

The Braves outscored the St. Louis Cardinals in the last three games of the National League Championship Series, 32-1, and they continued that roll with a 12-1 pasting of the Yankees in the Series opener. Rookie Andruw Jones, only 19, paced the Atlanta attack with two homers and five RBIs. The Yankee bats remained quiet in Game 2, as Greg Maddux and Mark Wohlers combined on a four-hit shutout, the Braves prevailing 4-0.

So the Yankees headed to Atlanta for Game 3, down 2-0, and things looking bleak. But New York got on the board with a 5-2 victory, thanks to some gutsy pitching from David Cone and a three-run rally in the eighth inning. The Yankees showed great heart in Game 4, in which they fell behind 5-0 in the third inning. By the fifth it was 6-0, but the Bombers scored three runs in the sixth and three more in the eighth, the latter three coming on Jim Leyritz's home run. It was still 6-6 after nine. With two out in the 10th, Braves manager Bobby Cox ordered Bernie Williams intentionally walked to load the bases. Wade Boggs then followed with an unintentional walk, giving the Yankees the lead. A Ryan Klesko error led to another run, and John Wetteland finished up for Atlanta to even the Series at two games apiece.

Destiny ends with N-Y. It ends with New York Yankees third baseman Charlie Hayes, just another refugee rescued from baseball oblivion, clutching a foul pop to strand the Atlanta Braves' potential winning run. It ends with the Yankees, who trailed two games to none in the World Series, winning four consecutive games, in three of which they beat Cy Young Award winners (this season's probable winner, John Smoltz, included) and in the other they staged the second-greatest comeback in Series history. It ends with a victory lap around Yankee Stadium by a team full of comeback stories, people who have made it back from the most woebegone of places: the Betty Ford Center, Columbia Presbyterian Hospital, the Alabama Sports Medicine and Orthopaedic Center, the Northern League, not to mention the Detroit Tigers and the Pittsburgh Pirates.

What else could it be but destiny when New York manager Joe Torre's brother, Frank, has heart transplant surgery on Friday, the only off day for the World Series, performed by a wizard of a doctor named Oz. The heart donor was a man who lived in the Bronx. There's no place like home. 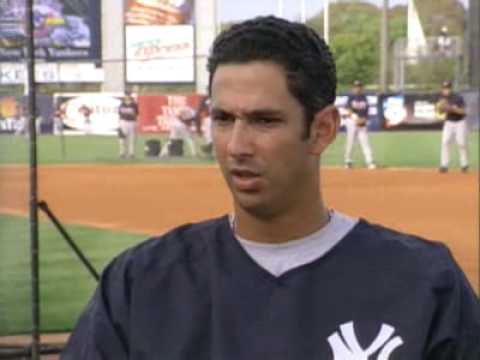