King of Fighters '95 is Released

The King of Fighters '95 is a 1995 fighting game produced by SNK for the Neo Geo arcade and home console.

The game features a similar cast to KOF '94 with the exception of the USA Team, which was replaced by the Rival Team. The plot features a new King of Fighters tournament once again promoted by the criminal Rugal Bernstein who wants to take revenge on the fighter who defeated him last year. The game also introduces a sub-boss character, Saisyu Kusanagi, who is the father of Kyo Kusanagi, the lead character from the game. 'KOF '95' also introduces the fighter Iori Yagami, who becomes Kyo's rival in the series.

One of the main focuses in the creation of The King of Fighters '95 was the introduction of the Rivals Team, most notably Iori, who became one of the favourites character from the staff. The game has received mixed reviews from various video games publications. Most writers have complained about the response from controls and long loading times from the PlayStation port. However, the introduction from the enhanced version of Rugal, Omega Rugal, as well as the differences between all the characters have been noted to be one of the best parts from the game.

King of Fighters' main selling point, and most redeeming feature, is the sheer number of playable characters: 26, including two boss characters. For team battles, players can choose among eight pre-programmed teams, or use the "Team Edit" mode to select any three characters. Another feature that keeps KOF from being a complete Street Fighter clone is the inclusion of Last Resort moves: When a character is near death, new, fairly difficult moves become available. These moves include massive fireballs, super combos, and more. 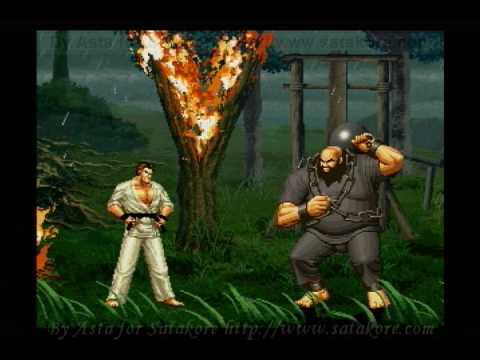