After losing the World Series to the Toronto Blue Jays in 1992 and falling to the Philadelphia Phillies in the National League Championship in '93, the Atlanta Braves returned to the Fall Classic following a forced one year hiatus due to the subsequent cancellation of the Series by the collective team owners. Baseball's newest dynasty had boasted a strong farm team system that featured Andruw Jones who batted .277 with twenty-five home runs, one hundred runs batted in and fifty-six stolen bases at Class-A Macon (South Atlantic) and their current line-up was just as good with Javier Lopez, Ryan Klesko and Chipper Jones at the plate.

By 1995, Atlanta was being compared to the NFL's Buffalo Bills for their postseason futility. Three times in the past four seasons the Braves had made it to the playoffs, only to come up short of a World Series crown each time.

Atlanta's strength remained its starting pitching, as Tom Glavine, Greg Maddux, and John Smoltz formed the nucleus of one of the best rotations in baseball history. Cleveland, meanwhile, was an offensive juggernaut, leading the Majors in batting, homers and runs.

On its third try in five years, Atlanta finally won the World Series

As rain and darkness fell like a soggy blanket over Atlanta last Friday afternoon, two men sat in a car slogging north through downtown traffic, two men who over the past five years have accounted for every National League Cy Young Award, 181 victories and a .691 winning percentage. This is how the Atlanta Braves would win the 1995 World Series: with Tom Glavine in the driver's seat and Greg Maddux riding shotgun.

It was on their ride home from a workout that Maddux talked an uncertain Glavine into a game plan for Game 6 the following night. Glavine, having watched the Cleveland Indians get to Maddux in Game 5, wondered what adjustments the Indians had made against him with their second look. "I don't think they adjusted well," Maddux said. "I was off a bit. It was more me than it was them. Just go out and pitch your game. Don't change." 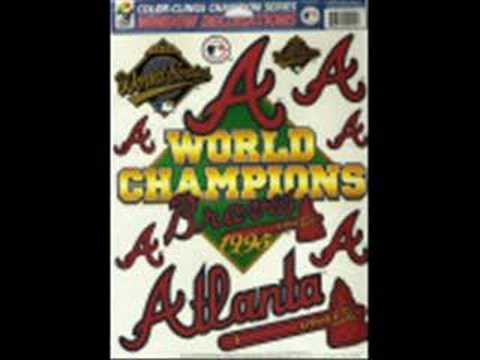