The worst quake to hit Japan since the Great Kanto Earthquake of 1923, which killed 143,000 people, the recent tremor has provoked considerable discussion in Japan and abroad about lessons to be learned.

Five thousand five hundred two people confirmed killed, 36,896 injured and extensive damage (VII JMA) in the Kobe area and on Awaji-shima. Over 90 percent of the casualties occurred along the southern coast of Honshu between Kobe and Nishinomiya. At least 28 people were killed by a landslide at Nishinomiya. About 310,000 people were evacuated to temporary shelters. Over 200,000 buildings were damaged or destroyed. Numerous fires, gas and water main breaks and power outages occurred in the epicentral area. Felt (VII JMA) along a coastal strip extending from Suma Ward, Kobe to Nishinomiya and in the Ichinomiya area on Awaji-shima; (V JMA) at Hikone, Kyoto and Toyooka; (IV JMA) at Nara, Okayama, Osaka and Wakayama; (V) at Iwakuni. Also felt (IV JMA) at Takamatsu, Shikoku. Right-lateral surface faulting was observed for 9 kilometers with horizontal displacement of 1.2 to 1.5 meters in the northern part of Awaji-shima. Liquefaction also occurred in the epicentral area.

The Great Hanshin earthquake, or Kobe earthquake, was an earthquake that occurred on Tuesday, January 17, 1995, at 05:46 JST in the southern part of Hyōgo Prefecture, Japan. It measured 6.8 on the Moment magnitude scale (USGS), and Mj7.3 (adjusted from 7.2) on JMA magnitude scale. The tremors lasted for approximately 20 seconds. The focus of the earthquake was located 16 km beneath its epicenter, on the northern end of Awaji Island, 20 km away from the city of Kobe.

Approximately 6,434 people lost their lives (final estimate as of December 22, 2005); about 4,600 of them were from Kobe. Among major cities, Kobe, with its population of 1.5 million, was the closest to the epicenter and hit by the strongest tremors. This was Japan's worst earthquake since the Great Kantō earthquake in 1923, which claimed 140,000 lives. It caused approximately ten trillion yen in damage, 2.5% of Japan's GDP at the time. Based on the average currency conversion rate over the following 500 days of 97.545 yen per USD, the quake caused $102.5 billion in damage. 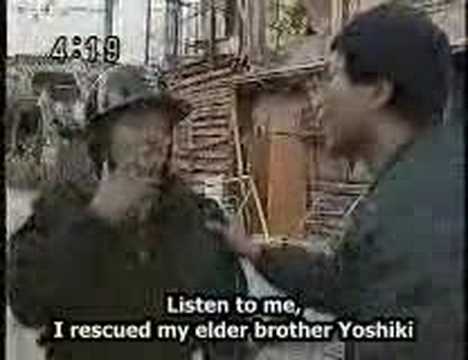