Pulp Fiction is a 1994 crime film directed by Quentin Tarantino, who cowrote its screenplay with Roger Avary.

The film is known for its rich, eclectic dialogue, ironic mix of humor and violence, nonlinear storyline, and host of cinematic allusions and pop culture references. The film was nominated for seven Oscars, including Best Picture; Tarantino and Avary won for Best Original Screenplay. It was also awarded the Palme d'Or at the 1994 Cannes Film Festival. A major critical and commercial success, it revitalized the career of its leading man, John Travolta, who received an Academy Award nomination, as did costars Samuel L. Jackson and Uma Thurman.

Outrageously violent, time-twisting, and in love with language, Pulp Fiction was widely considered the most influential American movie of the 1990s. Director and co-screenwriter Quentin Tarantino synthesized such seemingly disparate traditions as the syncopated language of David Mamet; the serious violence of American gangster movies, crime movies, and films noirs mixed up with the wacky violence of cartoons, video games, and Japanese animation; and the fragmented story-telling structures of such experimental classics as Citizen Kane, Rashomon, and La jetée. The Oscar-winning script by Tarantino and Roger Avary intertwines three stories, featuring Samuel L. Jackson and John Travolta, in the role that single-handedly reignited his career, as hit men who have philosophical interchanges on such topics as the French names for American fast food products; Bruce Willis as a boxer out of a 1940s B-movie; and such other stalwarts as Harvey Keitel, Tim Roth, Christopher Walken, Eric Stoltz, Ving Rhames, and Uma Thurman, whose dance sequence with Travolta proved an instant classic. ~ Leo Charney, All Movie Guide 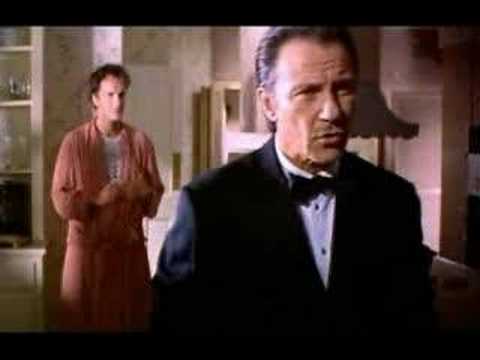